As you already know, HOLLYWOOD SPY has a huge thing for epic and historical shows and one of the shows we're looking for the most in the

future is pirate show BLACK SAILS which will replace SPARTACUS at Starz in 2013. The show just got its female lead - Jessica Parker Kennedy from SECRET CIRCLE who will play a beautiful and capable French prostitute named Max. British star Toby Stephens takes the lead role of Captain Flint the buccaneer, in the eight part series produced by famous Michael Bay which focuses on the tale of Captain Flint twenty years before the events of Robert Louis Stevenson's "Treasure Island". I've also informed you that superdashing Tom Hopper, Sir Percival from MERLIN, will play Billy Bones, first mate of the Walrus ship who becomes caught up in the conflict between Captain Flint and his nemesis Singleton. The show is being directed by GAME OF THRONES' Neil Marshall.


HOLLYWOOD SPY HEADLINES
Only a week ago I've informed you about A KNIGHT'S TALE being made into a TV series and now some other films are moving to television format too.  According to the Hollywood Reporter hilarious comedy BAD TEACHER which starred Cameron Diaz and Justin Timberlake a

few years ago, will be made into a TV show at CBS. As you remember, Diaz played the worst teacher in the world, a foul-mouthed lady who attempts to seduce her colleague thinking he was rich. Meanwhile, NBC is planning to adapt ABOUT A BOY film with Hugh Grant into TV show. Based on Nick Hornby's novel it tells the story of Will Freeman, a self-involved bachelor whose life is disrupted by his new neighbours - a young boy named Marcus and his mother Fiona. In short TV news, REVOLUTION, NEW NORMAL and Matthew Perry's GO ON have all received full season orders at NBC, ONCE UPON A TIME's new character Captain Cook played by Colin O'Donoghue has been proclaimed into a regular, while Whoopie Goldberg will guest star in ABC's new horror show 666 PARK AVENUE.


"MENTAL" TRAILER
Here is something utterly delightful. Coming from Australia (they always have adorable films from MURIEL'S WEDDING and STRICTLY BALLROOM to GRIFF THE INVISIBLE), MENTAL is a comedy drama which just opened up in cinemas Down Under. Reuniting Director P.J. 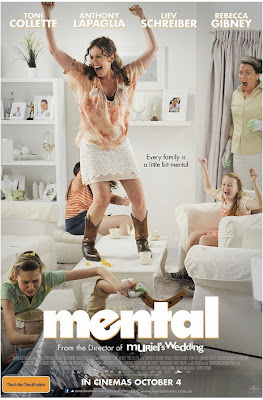 Hogan and Toni Collette for the first time since "Muriel's Wedding", MENTAL stars an incredible ensemble cast including Anthony LaPaglia, Rebecca Gibney, Liev Schreiber, Kerry Fox, Caroline Goodall, Sam Clark and Deborah Mailman. Their mother, Shirley, unable to cope with her demanding daughters and unsupported by her philandering politician husband, Barry, suffers a nervous breakdown. After Barry commits his wife to a mental hospital (telling his constituents that "she's on holiday") he finds himself alone with five teenage girls he barely knows. Desperate, he impulsively picks up a hitchhiker named Shaz (always wonderful Toni Collette) and installs her in his home as nanny to his daughters.


I've also wanted to thank Ken Follett, the famous author of worldwide bestselling epic sagas THE PILLARS OF THE EARTH and WORLD WITHOUT END and one of world's legendary writers in historical genre, for tweeting about your HOLLYWOOD SPY this weekend. What a true honour!