Two trailers for you today, people! First here's the first, rather lovely, trailer for next year's animated film which I've recently spotlighted: Dreamwork's THE 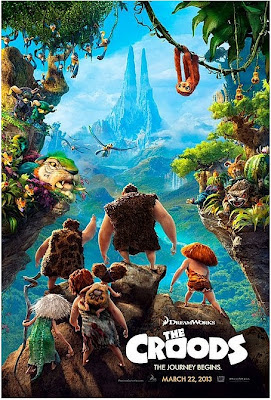 CROODS which hits theatres next March. Surviving in a volcanic world is tough enough, but caveman Grug (Nicolas Cage) gets a rude awakening when an earthquake forces him to leave behind the only world he knows. With his family in tow, he ventures out into the volatile world in search of a new home. The situation becomes even more complicated when Grug's family - but in particular his eldest daughter (Emma Stone) - become smitten with a nomad (Ryan Reynolds) they encounter on their dangerous journey. This quirky, imaginative stranger's search for 'tomorrow' is at odds with Grug's reliance on the traditions of yesterday!

HOLLYWOOD SPY HEADLINES
In today's short news: Jake Gyllenhaal has joined PRISONERS in which Hugh Jackman plays a small-town carpenter named Keller whose young daughter and her best friend are kidnapped. After

the cops fail to find them, Keller takes the law into his own hands, but in the process runs up against Detective Loki (Gyllenhaal), a hot shot cop with confidence to burn, assigned to the case. Meanwhile, "Variety" reports that Anthony Mackie has joined antiromantic film A MANY SPLINTERED THING in which our favourite hunk Chris Evans plays a man who meets an engaged woman (Michelle Monaghan), just as he is becoming disenfranchised with the prospect of love. He starts a platonic relationship with the woman, in hopes of trying to win her over, despite her relationship status. The script was on the famous Black List last year and also stars Giovanni Ribisi.


PARKER TRAILER
The second trailer for today is a more serious one: with a strange combination of Jason Statham and Jennifer Lopez, action flick PARKER hits 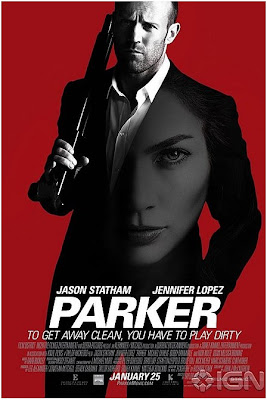 cinemas next next January. Parker (Jason Statham) is a professional thief who lives by a personal code of ethics: Don't steal from people who can't afford it and don't hurt people who don't deserve it. But on his latest heist, his crew double crosses him, steals his stash, and leaves him for dead. Determined to make sure they regret it, Parker tracks them to Palm Beach, playground of the rich and famous, where the crew is planning their biggest heist ever. Donning the disguise of a rich Texan, Parker takes on an unlikely partner, Leslie (Jennifer Lopez), a savvy insider, who's short on cash, but big on looks, smarts and ambition. Together, they devise a plan to hijack the score, take everyone down and get away clean.
Posted by DEZMOND at 12:00 AM