MOVING TRAILER FOR ADRIEN BRODY'S EPIC DRAMA "BACK TO 1942"! ZIYI ZHANG IS "MY LUCKY STAR"! RYAN REYNOLDS IN "BATTLE FOR BONNEVILLE"! JOE WRIGHT HELMING "THE SECRET LIFE OF HOUDINI"

According to "The Wrap" scandal loving Chinese star Ziyi Zhang will star in the sequel to her 2009 blockbuster SOPHIE'S REVENGE which followed two ex-lovers working together to win back their lost loves. The interesting

thing is that the sequel, titled MY LUCKY STAR will be directed by Dennie Gordon who will be the first American filmmaker to helm a feature for the Chinese market. The comedic adventure will be set all over the globe, with featured locations including Beijing, Singapore, Hong Kong, and Macau. As I've reported before Ziyi will also star in THE GREAT WALL a period adventure depicting a mystery centered around the construction of the Great Wall of China. Henry Cavill and Benjamin Walker are leading the cast. Later this December in China she will have the premiere of action epic THE GRANDMASTERS, the story of martial arts master Ip Man, the man who trained Bruce Lee. She was also supposed to play a live action MULAN in Jan De Bont's historical film, but that one is on hold.

Beside starring in crazy film THE VOICES and preparing to become the new HIGH- LANDER, Blake Lively's new hubs Ryan Reynolds will also take part in BATTLE FOR BONNE- VILLE. John Favreau directs this high speed drama based on the true story of half brothers Art Arfons and Walt Afrons who used to be fierce rivals on the race track, before teaming up to break the land speed record three times, using a jet-powered race car. Meanwhile ATONEMENT's and ANNA KARENINA's Joe Wright might helm THE SECRET LIFE OF HOUDINI. According to "MovieWeb" the project is based on the book written by William Kalush and Larry Sloman, which claims that world famous magician Harry Houdini also lead a double life as a British spy. Wonder if he'll put his talentless pet actress Keira Knightley in the Houdini role :)
BACK TO 1942 TRAILER
And I have a deeply moving trailer for you today: it is the trailer for touching historical drama BACK TO 1942 with Oscar winner Adrien

Brody, Chinese actress Fan Xu and Tim Robbins. The story of this sweeping war saga is set in the period of a deadly drought in 1942 which

took a dramatic toll on central China's Henan province during the war against Japan. Adrien Brody's and Tim Robbins' characters in the

film, an American journalist and a Catholic priest, are trying to deal with famine, warfare and the depths of human suffering. This $33 million 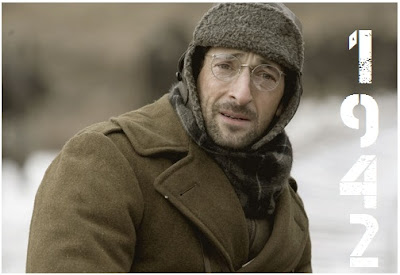 Chinese epic film should hit cinemas in November. The story of the movie is actually based on a true story depicted in a novel by Zhenyun Liu.