You do know how your HOLLYWOOD SPY loves ensemble films, and it seems that the new project of Oscar winner Paul Haggis (CRASH) is getting a truly stellar cast. His new movie THIRD PERSON will be a structurally complex drama following three couples living in Rome, Paris, and New York, with each pairing representing the beginning, the middle, and the end of a relationship. Adrien Brody and Moran Atias play the new couple who take a road trip through Italy. Liam Neeson and Kim Basinger portray the Paris couple, who are both writers. Mila Kunis and James Franco are playing the embattled New York couple. Casey Affleck has left the project and was replaced by Brody, but Maria Bello is also a new addition to the cast. The film should hit cinemas in 2014.


HOLLYWOOD SPY HEADLINES
So, here's a nice cast: according to "Variety", two British thespians Mark Strong, who shined earlier this year in JOHN CARTER, and Brian Cox have joined sf thriller MINDSCAPE in which the story centres on a man 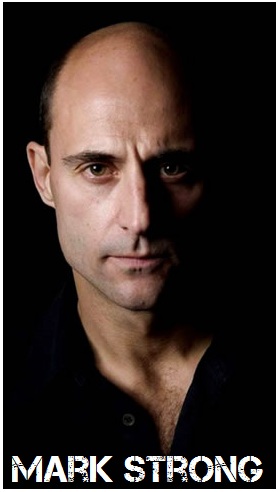 who has the unique ability to enter a person's mind. He examines a young girl to determine if she is a highly intellectual sociopath, or just a misguided teenager. Another casting update comes from romantic comedy 5 TO 7 which will have Diane Kruger and Anton Yelchin in the cast. Written and directed by MAD MEN creator, the film is set in New York, where an aspiring novelist (Yelchin) has a cinq-a-sept affair with the beautiful wife of a French diplomat (Kruger). Cultures, world views, personal ethics and dietary preferences clash as love deepens, with remarkable results in this romantic comedy.


THE GUILLOTINES TRAILER
And I have yet another Asian trailer for you. Directed by Andrew Lau, THE GUILLOTINES follows a secret assassination squad known as the Guillotines established by Emperor Yong Zheng to eliminate all who opposed him. Once heavily favored by the Emperor, the Guillotines 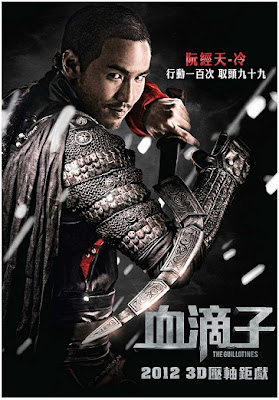 are deemed expendable once Emperor Qian Long ascends to the throne and adopts Western ideas and technology. To consolidate his power under a new regime, the Emperor continues to use the Guillotines to persecute the conquered Han Chinese in a reign of terror and oppression. Led by master fighter Leng, the top ranked guillotine squad consists of five young warriors: Mu, San, Tai, Hutu and Buka. Serving the Qing Court unquestioningly, they have never failed in 348 missions to eliminate their targets. But their success has made them arrogant and complacent. Their next mission is to eliminate Wolf and his Shepherd gang. During the operation, the squad manages to trap Wolf. Just as they are about to execute him, the squad commander orders that he be captured alive. He secretly plans to use Wolf as a pawn in his bid for power. Wolf's gang of rebels ambushes the Guillotines in their moment of hesitation. Wolf escapes, taking Mu hostage. With reports that Wolf has fled to the outer frontiers, the squad tracks him to a remote village outpost. On the other 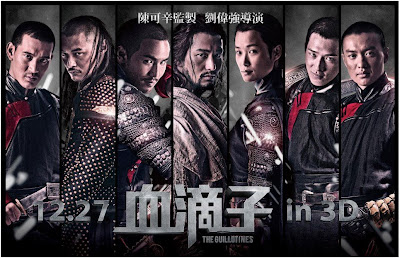 hand, the Emperor has sent his most trusted agent Du for the same mission and most importantly, to end the era of the Guillotines by replacing cold weapons with firearms. If only they make one false move, they will become the hunted. Facing annihilation, Leng and his Guillotines must outfight and outwit enemies from both sides.
Posted by DEZMOND at 12:00 AM