If you like video games there are a lot of them awaiting movie adaptation. One of them is MASS EFFECT, which will be adapted by Legendary

Pictures and is set in the year 2183, centring on a space commander leading an elite team on a mission to destroy a deadly alien race. These mechanized aliens wipe out everything in the galaxy once every 50,000 years. On the other hand, the adaptation of ASSASSSIN'S CREED has found its home at New Regency. Michael Fassbender will both produce and star in the story which features a man travelling back in time to operate in the shadows of various historical events. Another similar project will also be INSURRECTION which, based on a comic book, will be Paramount's sci-fi take on the story of Spartacus, following a man who leads an uprising against powerful corporations that command clone armies and rule the world.


HOLLYWOOD SPY HEADLINES
Beside video games, another popular thing to adapt onto films are classic novels and it seems that beside LES MISERABLES, GREAT EXPECTATIONS, ANA KARENINA and THERESE RAQUIN, we'll be getting another classic novel adapted onto the big screen: it will

be Flaubert's MADAME BOVARY which will have Rhys Ifans, Paul Giamatti and Mia Wasikowska in the story about a married woman who tries to enhance her social status by having a number of extramarital affairs. Rhys Ifans will play Monsieur Lheureuse, who leads her to her financial downfall by making her buy things on credit. Meanwhile, "Deadline" reports that in the sea of new historical shows, CW is preparing their teen take on MARY QUEEN OF SCOTS! Pitched as "Game of Thrones" meets "Marie Antoinette" the pilot, titled REIGN, will show Mary as a "warrior queen" with a "girl posse" who fought to gain the throne of Scotland after spending her childhood at the French court, only to end up killed by her own sister Elizabeth I. As I've reported earlier this summer, Michael Hirst of TUDORS and ELIZABETH THE GOLDEN AGE (in which she was portrayed by Samantha Morton), has a plan of shooting a film on Mary with Saoirse Ronan and BBC had a great mini series on her with Clemence Poesy in the lead role.


SAFE HAVEN TRAILER
I have a lovely romantic trailer for you today. It is the first trailer for SAFE HAVEN movie adaptation of Nicholas Sparks' bestselling novel, which, appropriately, hits cinemas February 8th 2013 directed

by amazing Lasse Hallstrom. When a mysterious young woman named Katie (Julianne Hough) appears in the small North Carolina town of Southport, her sudden arrival raises questions about her past. Beautiful yet self-effacing, Katie seems determined to avoid forming 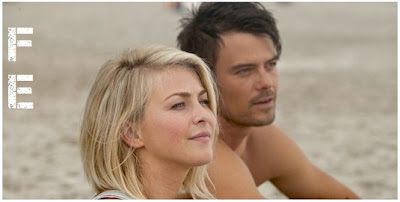 personal ties until a series of events draws her into two reluctant relationships: one with Alex (Josh Duhamel), a widowed store owner with a kind heart and two young children; and another with her plainspoken single neighbor, Jo (Cobie Smulders). Despite her

reservations, Katie slowly begins to let down her guard, putting down roots in the close-knit community and becoming increasingly attached to Alex and his family. But even as Katie begins to fall in love, she struggles with the dark secret that still haunts and terrifies her . . . a past

that set her on a fearful, shattering journey across the country, to the sheltered oasis of Southport. With Jo's empathic and stubborn support, Katie eventually realizes that she must choose between a life of transient safety and one of riskier rewards... And that in the darkest hour, love is the only true safe haven!
Posted by DEZMOND at 12:00 AM