EMILY BLUNT IS MS. MARVEL IN AVENGERS 2"? ARMIE HAMMER IS BATMAN IN "JUSTICE LEAGUE"? TRAILER FOR KELLAN LUTZ' "TARZAN"! ANNE HATHAWAY IN "THE LOW SELF ESTEEM OF LIZZIE GILLESPIE" ROMCOM

reveals that brilliant British thespian Emily Blunt (whom you are currently watching in sf film LOOPER next to Bruce Willis) is the main candidate to play Ms. Marvel in the sequel to this year's super successful adventure AVENGERS. Chris Evans, Chris Hemsworth and others are returning to their superhero roles in the film which is due in cinemas in summer 2015 (before that other sequels will hit cinemas - IRON MAN III, THOR 2: THE DARK WORLD and CAPTAIN AMERICA: THE WINTER SOLDIER)! Ms. Marvel was first Major Carol Daniels, a member of the U.S. Air Force and she didn't have any super powers, until she was exposed to an explosion of a Kree device that turned her into a human-Kree hybrid.

LIZZIE GILLESPIE. The script which was on the famous Black List  follows a woman whose low confidence is keeping her from meeting the man of her dreams. After hitting rock bottom, her life turns around when a handsome suitor starts to pursue her. New rumours have appeared around DC's movie adaptation of JUSTICE LEAGUE which would gather all their superheroes in one place like Marvel did with AVENGERS. According to "Moviehole" Armie Hammer (who's getting more big roles after MIRROR MIRROR and LONE RANGER) might play Batman, but only within this franchise which will see the characters of Superman, Batman, The Flash, Wonder Woman, Green Lantern and Martian Manhunter teaming up. 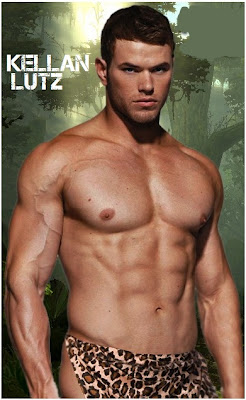 I have a rather beautiful trailer for you today launched around the web a few days ago. It is the first 3D animated film from German Constantin Film - TARZAN directed by Reinhard Klooss and the voices are given by young Hollywood star Kellan Lutz, Mark Deklin and by Spencer Locke. The film updates the classic Edgar Rice Burroughs jungle hero. For example, Tarzan's parents, billionaire adventurers, are now killed in airplane crash rather than being marooned with their child. And the movie's villain is the CEO of Greystoke Energies, a man who took over the company from Tarzan's deceased parents. In the

script, Jane is the daughter of an African guide and is committed to the conservation and preservation of the African jungle. She eventually works with Tarzan to defeat the mercenary army of Greystoke Energies. This animated adventure which employs motion capture technology

will hit cinemas later in 2013. Although the trailer reveals that they should've worked a bit more on TARZAN's face, I was really enchanted by mesmerizing lush greens in the jungle which looked absolutely real and palpable!
Posted by DEZMOND at 12:00 AM