It seems we shall have a romantic comedy day today at HOLLYWOOD SPY. First, "The Hollywood Reporter" writes about Ewan McGregor and Kate Hudson negotiating to take the lead roles in mistaken identity romantic flick BORN TO BE KING. The story revolves around a film extra (McGregor) who has an uncanny resemblance to a movie star and a Hollywood starlet (Hudson) who’s at war with her co-star and begins to fall for the extra. Meanwhile Ewan's fantasy adventure JACK THE GIANT KILLER has been renamed to JACK THE GIANT SLAYER and will hit cinemas next March, and he is currently shooting AUGUST OSAGE COUNTY with Meryl Streep in which he plays Julia Robert's cheating husband. His powerful drama THE IMPOSSIBLE about the infamous tsunami in Asia will hit cinemas soon and might bring him some awards nominations.


HOLLYWOOD SPY HEADLINES
Well, this certainly is the oddest pairing ever, but "The Hollywood Reporter" says that Michael Douglas and Diane Keaton will play two eccentrics who refuse the idea of love until they are hopelessly, inextricably mired in

it in the romantic comedy AND SO IT GOES by always brilliant P.J. Hogan (MURIEL'S WEDDING, MENTAL). Douglas will play a self centered and eccentric realtor who couldn’t care less about anyone else, but when his estranged son suddenly drops off a granddaughter he never knew, his life is turned upside down. Now, with the help of his determined and loveable neighbor, Leah (Keaton), he stubbornly learns to care, and unexpectedly, to fall in love again. We shall also see some romance in HATESHIP, FRIENDSHIP which follows a nanny (Kristen Wiig) hired to care for a rather wild teenage girl (Hailee Steinfeld). Using email, the girl orchestrates a romance between the nanny and the father (Guy Pearce), a recovering addict living in a different town. Also in the mix is the girl’s grandfather (Nick Nolte), who blames Pearce for the death of his daughter.


A ROYAL AFFAIR TRAILER
And to end the day with romance, here's a trailer for a historical romance: Danish film A ROYAL AFFAIR will hit US cinemas 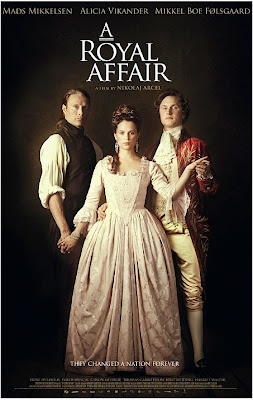 November 9th, starring some of the faces you know - Mads Mikkelsen and Alicia Vikander. Denmark's official submission for the Foreign Language Film category of the 85th Academy Awards follows the story of a young queen from the 18th century, who is married to mentally ill King Christian VII of Denmark, falls secretly in love with her physician - and together they start a revolution that changes a nation forever. Rich with luxurious and sumptuous sets, lavish costumes, and steadfast acting, the movie describes some true historical events in a very dynamic way. Mikkel Følsgaard who appears in the film as Christian VII won Silver Bear for best actor at this year's Berlin Film Festival!
Posted by DEZMOND at 12:00 AM