We've had a lot of really strange scripts recently, from Mark Wahlberg having a talking teddy bear as best friend in TED, to Daniel Radcliffe growing real horns on his forehead in HORNS, to KStew being deemed prettier than

Charlize Theron by some mirror in SNOW WHITE, and now we shall see the freshly married Ryan Reynolds doing something equally ridiculous in THE VOICES.  According to "Deadline" the psychological thriller centres on Jerry Hickfang (Ryan Reynolds), a bizarre man who works at a bathtub factory and pines for the woman in accounting. When their relationship takes a violent turn for the worse, Jerry consults with his evil talking cat and kind talking dog to get him out of this situation, that eventually leads to his salvation. Why are cats always getting villainous parts? I've never heard of someone being eaten by a cat, while people do often end up being bitten or eaten by dogs.


HOLLYWOOD SPY HEADLINES
According to "DIgital Spy" new show DRACULA, which will air at NBC in USA and Sky in UK, and will have THE TUDORS' Jonathan

Rhys Meyers in the title role, has got Dan Knauf as the showrunner. He previously worked on SPARTACUS BLOOD AND SAND. As I've reported before the show will see the Count arrive in Victorian London, posing as an American entrepreneur and planning to wreak havoc. However, his plans are derailed when he encounters a woman who appears identical to his dead wife. It will be a period set series in ten episodes. When it comes to your favourite THE HOBBIT updates, after Peter Jackson had Enya and Annie Lennox singing main songs for LORD OF THE RINGS, the first part of his prequel saga will have Neil Finn from Crowded House performing the end credits song. What a strange, strange choice. Does he know something we don't about Finn's voice?
FANTASY HEADLINES
In fantasy news today,  "MovieWeb" reports that yet to be released fantasy book saga BLACK CITY by Elizabeth Richards (the first book is out November) 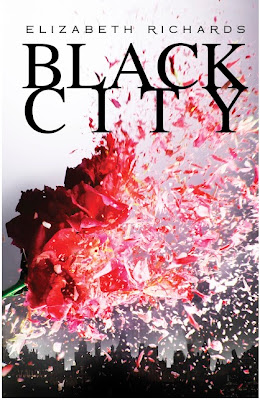 will get a movie adaptation. The book tells the story of a city where humans and Darklings are separated by a high wall and tensions between the two races still simmer after a terrible war: sixteen-year-olds Ash Fisher, a half-blood Darkling, and Natalie Buchanan, a human and the daughter of the Emissary, meet and do the unthinkable by falling in love. Oh, Lord, save us from the YA mania. Meanwhile "Heat Vision" reports that graphic novel ENORMOUS is also getting a movie version. Set in a world where an ecological event causes monstrous creatures to destroy civilization as we know it, the plot centers on a woman who tries to save lost children in this new, chaotic world. There's a plan to make films, video games and TV series out of this saga.
Posted by DEZMOND at 12:00 AM