Two TV news first, people: Michael Bay's new pirate show BLACK SAILS, which is to replace SPARTACUS saga which ends next year at Starz, has got its first cast member. Super dashing Tom Hopper (the pic is for my ladies :), whom my fellow epic show lovers will recognise as the brave Sir

Percival from BBC's hit show MERLIN, will star in the story, which set 20 years before the events in Robert Louis Stevenson’s "Treasure Island", chronicles the adventures of fabled buccaneer Captain Flint and his men aboard the Walrus. According to "Deadline" Hopper will play Billy Bones, the first mate of The Walrus who is caught in the middle of the power struggle between Flint and his main dissenter Singleton. "Deadline" also reports that beside ONCE UPON A TIME, ABC is planning another fantasy series: A KINGDOM FAR AWAY will be a fantasy adventure about a quirky family surviving together on a lawless frontier, a magical land where monsters are real, and one young woman’s unlikely destiny is about to change their lives forever. It comes from the producers who are also preparing CLEOPATRA series for NBC.


UNIVERSAL SOLDIER DAY OF RECKONING TRAILER
Since it has been an extremely slow week in the film news department, the only clip I have for you today is something you might take with some nostalgia, remembering the action packed 90's: it's the trailer for 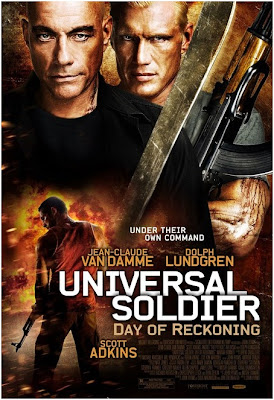 UNIVERSAL SOLDIER: DAY OF RECKONING which hits cinemas this November and brings back two of the biggest action stars of that decade Dolph Lundgren and Jean Claude Van Damme. In the film, surviving Unisols Luc Deveraux and Andrew Scott battle anarchy to build a new order ruled by Unisols without government oversight. To accomplish this, they weed out the weak and constantly test their strongest warriors in brutal, life-and-death combat. It is interesting that both stars, alongside Scott Adkins who is also in the cast, star in another film which reunites action stars from the past - EXPENDABLES 2! The trailer is so cheesy, you could put it on your pizza.
Posted by DEZMOND at 12:00 AM