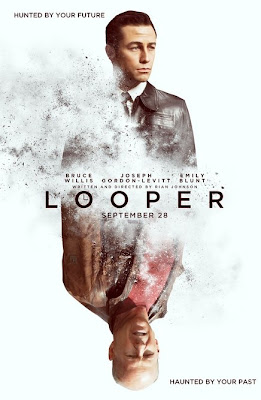 This year has certainly been a year of sf films, from a bunch of super hero flicks, to sf epic JOHN CARTER, and sf remake TOTAL RECALL and JUDGE DREDD, we shall arrive to sf action LOOPER this September. The film, starring Bruce Willis, Emily Blunt and Joseph Gordon Levitt, will open this year's Toronto Film Festival before it hits theatres around the world beginning with USA on September 23rd.

In a futuristic gangland in the year 2047, a 25-year-old killer named Joseph Simmons(Joseph Gordon Levitt) works for a mafia company in Kansas City as a "Looper." Loopers kill and dispose of agents sent by their employers from corporate headquarters in Shanghai from the year 2077. Loopers are foot soldiers, paid on the terms that all targets must never escape. When Simmons recognizes his target as a future version of himself (Bruce Willis), his older self escapes after inca- pacitating him. The resulting failure of his job causes his employers to come after him, forcing him to fight for his life as he hunts his older self. 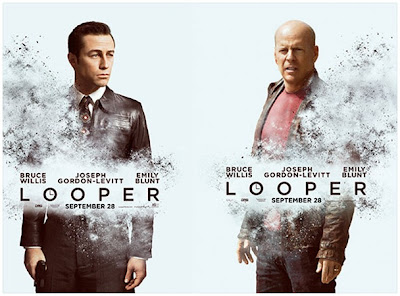 film noir. While the film is set in the future, the styling itself is a mixture of both retro and contemporary with a futuristic twist. For instance, many of the buildings used for the setting of the film reflect those from the 1930's and 1940's.

DID YOU KNOW? Emily Blunt will appear in another sf epic in which a hero is lost in a time loop, constantly reliving his day of death - ALL YOU NEED IS KILL, next to that crazy Tom Cruise. 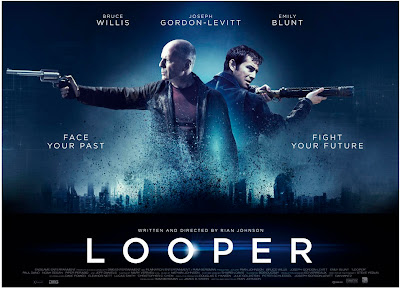 According to "Wikipedia" many vehicles used for the film are from the present day with many of them equipped with solar panels, futuristic wheel plates, cable boxes attached to the back, and as well with additional features for them to fit into this alternate reality. Since Joseph and Bruce don't look alike, Gordon Levitt had to spend hours in the make up chair in order to even remotely resemble younger Willis.
Posted by DEZMOND at 12:00 AM