Ever since he decided to put his music career on hold for indefinite time period, pop heartthrob Justin Timberlake  has been proving

his talent in acting business. His new gig is rather interesting: according to "Variety" Justin might take the lead in a Black List film THE LAST DROP which will follow an alcoholic restaurant critic for New York Magazine. The foodie realizes he must change his addictive behaviour when he falls for a young woman. Justin's previous romcom FRIENDS WITH BENEFITS earned double its budget last year and we shall also see him next year in RUNNER RUNNER next to Ben Affleck and Gemma Arterton in the story about a businessman who is caught up in the world of offshore online gaming.

HOLLYWOOD SPY HEADLINES
I've recently spotlighted a delightful new animated film THE CROODS which hits cinemas March next year, and today you can see a brilliant new poster for the film. If you click on the poster you can study all the 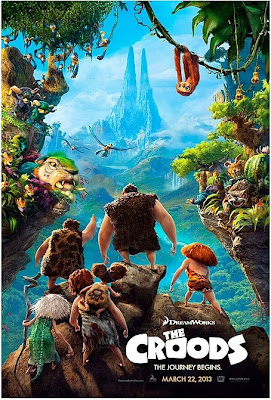 prehistoric beasts hidden on both sides of the jungle: Surviving in a volcanic world is tough enough, but caveman Grug (Nicolas Cage) gets a rude awakening when an earthquake forces him to leave behind the only world he knows. With his family in tow, he ventures out into the volatile world in search of a new home. The situation becomes even more complicated when Grug's family - but in particular his eldest daughter (Emma Stone) - become smitten with a nomad (Ryan Reynolds) they encounter on their dangerous journey. This quirky, imaginative stranger's search for 'tomorrow' is at odds with Grug's reliance on the traditions of yesterday!
GUILT TRIP CLIP
Since weekends should be fun time, here is a comedy trailer for you. Or not a trailer but a funny clip from the upcoming comedy

GUILT TRIP which opens up in cinemas December 25th this year. The cast is lead by an interestingly hilarious duo Barbra Streisand and Seth Rogen. Rogen plays an inventor who hits the road together with his mom and goes on a cross country trip with her so he can sell his latest invention and also so that he could reunite her with her old lost love. The cast also includes Yvonne Strahovski, Adam Scott, Colin Hanks, Kathy Najimy and other famous comedians. The movie is directed by Anne Fletcher who helmed some other charming movies such as 27 DRESSES, STEP UP and THE PROPOSAL. It is also interesting that this is Barbra's first leading role in more than 15 years. PS a certain zombie character threatened me with zombie invasion if I didn't post a naughty picture of Yvonne Strahovski today even though she's not even seen in the clip :)
Posted by DEZMOND at 12:00 AM