As you all know THE HOBBIT is the most anticipated film this year, if not this decade, and one of the actresses who will appear in the famous saga next to Cate Blanchett, Luke Evans, Lee Pace, Ian McKellen and Martin Freeman is Evangeline Lily who will play Elven girl Tauriel in both 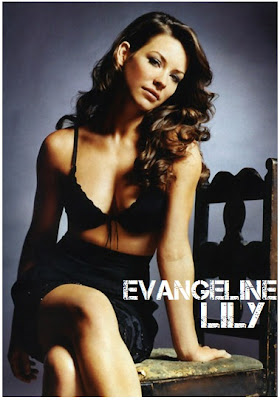 AN UNEXPECTED JOURNEY and THERE AND BACK AGAIN. Speaking this week to "Entertainment Weekly" she revealed that the shooting of the both films will last two years in total, with the stars coming in and out of New Zealand numerous times during that period. She also said that her character, a Mirkwood elf Tauriel, will be a dangerous warrior and the head of the Elven guard who uses a bow and arrow and two daggers as her primary weapons. She is apparently very lethal. She will appear in the first film near the end, but will have a longer part in the second film, a part which apparently became bigger after Peter Jackson was impressed with Lily's work.


HOLLYWOOD SPY HEADLINES
I've been mentioning Catherine Zeta Jones a lot these days, and I will do it again since she has just joined THE SIDE EFFECTS,the 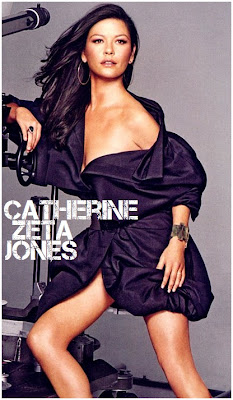 film I've also mentioned last week, in which Blake Lively plays a woman who gets addicted to prescription drugs out of fear that her husband (Channing Tatum) will be released from prison soon. Jude Law will play the woman's new therapist, while Catherine Zeta Jones will play another doctor in the Steven Soderbergh's film. At the same time, another project I've mentioned this week has a new cast member: according to "MovieWeb" Ron Livingston has joined THE CONJURING, the supernatural thriller in which Patrick Wilson and Vera Farmiga will play two demonologists who investigate the case of a couple (Livingston plays the husband) who lives in a farmhouse with evil spirits and other similar creatures.
And your trailer treat for today is an exclusive clip from the upcoming thriller THE LOFT which has a cast picked straight out of my wildest dreams - three of my favourite boys - Karl Urban (who in a strange and ironic twist of fate had replaced my fourth most favourite actor Patrick Wilson, LOL), Wentworth Miller and James Marsden. 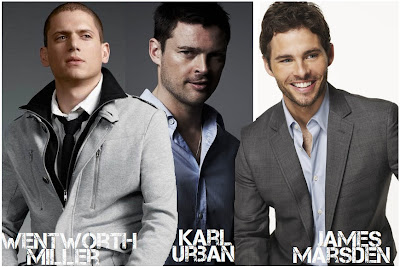 The trailer is in English, but has foreign subtitles, it's the only one released so far, but you will still enjoy it. The story of the film, shot in Belgium (since it is an English language remake of the Belgian hit film), follows five friends who share a loft for their extramarital affairs but begin to question one another after the body of an unknown woman is found in the property. The lovely ladies of the female part of the cast include Rhona Mitra (from UNDERWORLD 3), Isabel Lucas (played Goddess Athena in this winter's epic blockbuster IMMORTALS) and Rachael Taylor (from the unsuccessful CHARLIE'S ANGEL remake show).

PS Have you noticed that HOLLYWOOD SPY has crossed the 1,100,000th visitor? You know me loves you and there's nothing you can do about it :)
Posted by DEZMOND at 12:00 AM