Chris Evans definitely had successful previous year. Not only that he scored success with his amazing and believable performance in CAPTAIN AMERICA 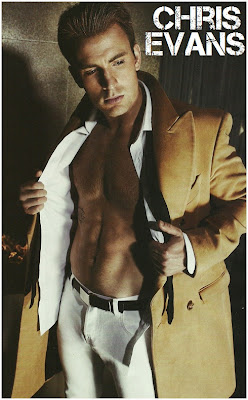 (the role he will repeat twice - first this summer in THE AVENGERS and then later on in the sequel to CAPTAIN AMERICA), but he also gave us a bit of romance, since we love him all cuddly and romantic, in WHAT'S YOUR NUMBER, and then he showed us some true acting skills in critically acclaimed drama PUNCTURED. The new project of his, just announced over at "Variety" is SNOW PIERCER, an extremely interesting fantasy action in which the story is set in a world that is completely covered in snow and ice, and follows a group of travellers trying to co-exist on a train. As I mentioned before, Chris Evans will also join Michael Shannon, David Schwimmer and Ray Liotta in THE ICEMAN, a 2013 film, the true story of Richard Kuklinski, the notorious contract killer and family man.

HOLLYWOOD SPY HEADLINES
One of our favourite channels STARZ which brought us legendary epic series SPARTACUS, is planning another historical show for us. It will be on famous 13th century explorer MARCO POLO in the form of a 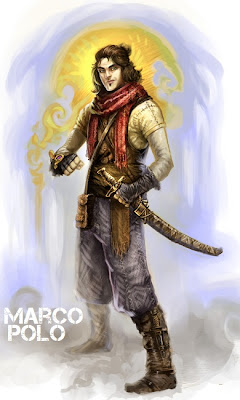 fantastical martial arts epic, chronicling the famous adventurer's early years in the court of Kublai Khan. Acting as the ruler's spy, ambassador and explorer, Marco treks across the Far East and returns with tales of his journeys. In a court filled with political betrayal and forbidden relationships, Marco must use his martial arts training to survive, but it is his ability to enchant Khan with imaginative tales of his kingdom that is often his best tool to stay alive. Wowza, sounds totally like my cup of tea! It will be produced by the Weinstein company and written and created by John Fusco (HIDALGO)! Back in 2010 HOLLYWOOD SPY also wrote about a possible MARCO POLO movie at Warner Bros, but nothing happened with that one. And back in 2009 even John Woo had a plan of a similar project.
GOLDEN GLOBES 2012
I'm sure you will agree with me that Golden Globes 2012 were more or less the usual crapfest when it comes to awards and the winners so let us move straight to the fashion report, I know you like that one best :) Well, I don't know about you but the first thing I thought when I saw the stars at the red carpet was - What were they thinking? Too many bad 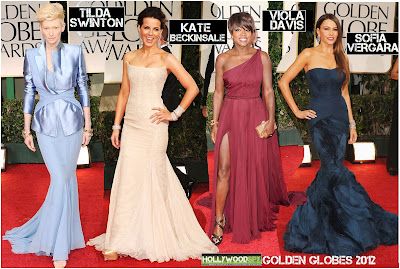 outfits, horrid hairdos, way too much trashy colours and shapeless dresses were seen at the ceremony this year. But every crapfest has its pearls and this year, the best dressed were Kate Beckinsale (she was there only for her beauty, right?), always stunning Sofia Vergara in her divine blue dress and two surprises, at least for me, were Viola Davis, who looked lovely in her simple but elegant burgundy gown, and

Tilda Swinton in an extremely refined ice blue outfit (she is usually the biggest freak, but not this year). Also looking lovely were Elven beauties Berenice Bejo in blue, Dianna Agron in the breathtaking filigree lace gown probably made by the elves from Earendil :), truly stunning, and I also loved Evan Rachel Wood's arborial green gown with feathers, scales and leaves, although her hairdo was really bad along with her make up. PS CLICK ON THE PICS TO SEE THEM BIGGER

ON THE DARK SIDE
Some ladies, going safe, decided for dark colours last night, some of them with success, like Helen Mirren, who looked amazing in her 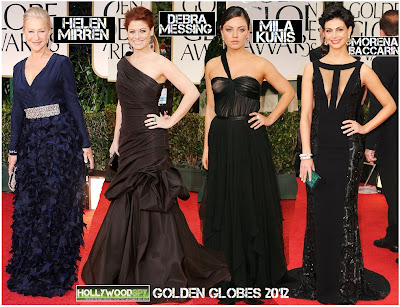 INTERESTING ONES
Diane Lane was looking truly refined in her beige sparkly gown,  Octavia Spencer was charming and cute in lavander, Nicole 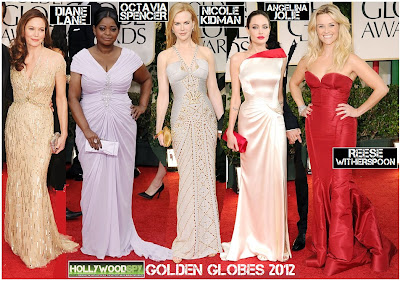 Kidman went unsuccessfully for Egypt, while Angelina Jolie was obviously preparing for her role in MALEFICENT. Reese Witherspoon had a weird red thing on her.

BLUE FREAKS
It seems blue was the trade mark colour for freaks this year: Freida Pinto in a blue grandma's drapery, Kelly Osbourne - I'm not even sure why she was there, Jodie Foster looked like an upholstered chair, while Sarah Michele Gellar came out of a paper bin covered in ink. 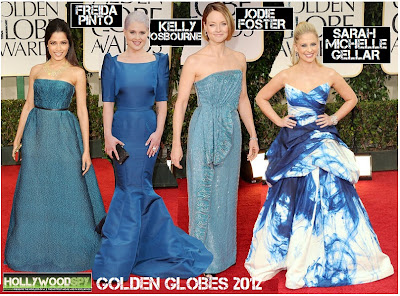 FREAKS OF THE YEAR
She might be the actress of the year but Michelle Williams' 70' style we just ain't buying, you're not Mia Farrow, Charlize Theron - beauty 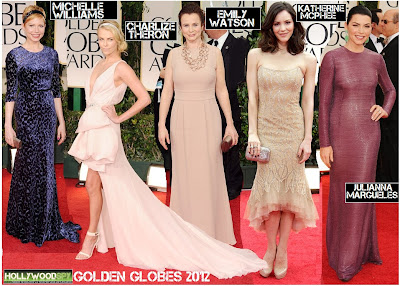 dog. So tell me, who were your chics and freaks last night?


ATTENTION
PS Ever since Blogger has started installing this amazing REPLY button in the comments for us, lots of Bloggers have had troubles opening pages and commenting. If that happens to you, you must switch from Internet Explorer to Firefox.
Posted by DEZMOND at 12:00 AM