Well, my little freaks, it seems we shall have another picture Saturday, like we did last week (with a mindblowing success - it was the best visited Saturday post ever :). A bunch of new pics for the upcoming flicks has been released around the net, so here we go:

MAGIC INDEED
The first one is a naughty one for my ladies and other fans of super tight male bodies: the first picture from Steven Soderbergh's film 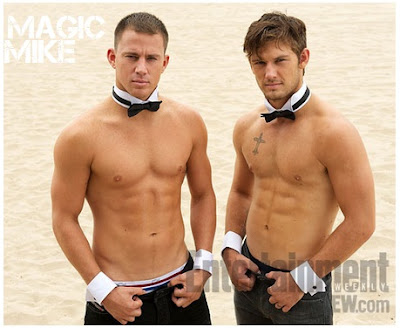 MAGIC MIKE has finally arrived from "Entertainment Weekly" showing Channing Tatum strutting his jaw dropping muscles with Alex Pettyfer in the first, and Matthew Bomer in the second pic. As you remember, the film actually follows Channing Tatum's real life 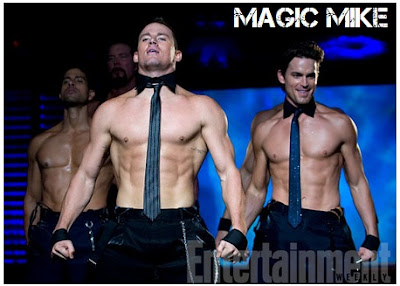 beginnings as a male stripper and also stars Matthew McConaughey, Joe Manga Hunky Niello :) and for the boys Olivia Over The  Munn! The film is out this June.


IS THAT JOHNNY?
Another great photo for today is the first one from Tim Burton's movie adaptation of the famous classic TV show DARK SHADOWS showing, an almost unrecognisable, Johnny Depp as the vampire 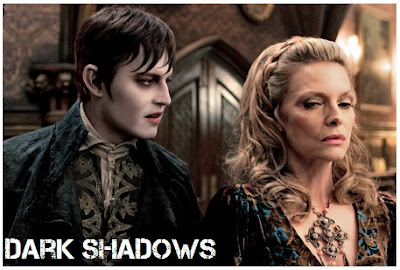 Barnabas Collins next to Michelle Pfeiffer who is finally showing her real age in the pic. Hitting theatres this May and following the adventures of the crazy family of monsters, the film also stars Helena Bonham Carter and Jonny Lee Miller.


SPEEDOFALL (WE WISH)
Yet another lovely pic for my ladies, and those who love muscly male bodies, is this one from the new James Bond movie SKYFALL. It doesn't reveal much, but I guess that is the point since it shows Daniel 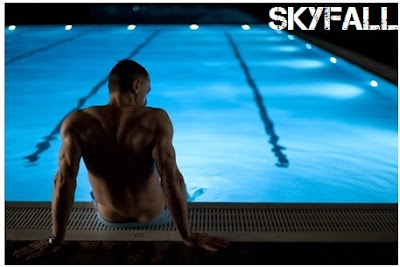 Craig sitting beside a pool wearing nothing but speedos and if you look more closely you will see 007's bums :) Opening in cinemas this November, SKYFALL will see Judi Dench as his boss, Ralph Finnes and Javier Bardem as the villains and Ben Whishaw as the new gadget expert Q.


LINCOLN'S AXE
You can also check out another picture from Timur Bekmambetov's fantasy period horror ABRAHAM LINCOLN: VAMPIRE HUNTER showing young Benjamin Walker as the infamous American president holding an axe and probably planning to attack some naughty vampires since the film shows the stateman as a nocturnal hunter on evil undead bloodsuckers. Some people around the net 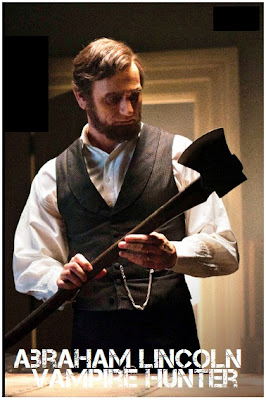 said they thought the pic was from THE HOBBIT :)) Ready to premiere this June, this strange combination of history and fantasy also stars Rufus Sewell as the leader of the vampires alongside Anthony Mackie and Dominic Cooper.


HOLLY WOOD SPY HEAD LINES
The latest news from Hollywood say that Joss Whedon's THE AVENGERS will be told from Captain America's perspective, which means that Chris Evans will be the main star in the cast. Steven Spielberg has announced that he will not direct JURASSIC PARK IV and that, although TIN TIN had a lukewarm success in the cinemas this December, the work on the sequel will start later this year, helmed by Peter Jackson. Tim Burton is apparently considering making a sequel to BEETLEJUICE with Michael Keaton reprising his role. 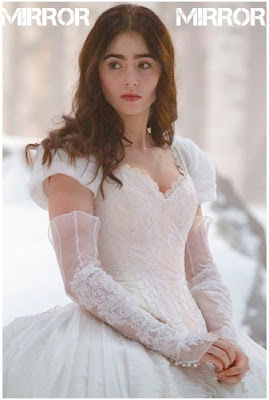 SNOW WHITE IN THE SNOW
There's also a new behind the sets picture from this year's biggest fairy tale epic MIRROR MIRROR showing Lily Collins as Snow White walking around the snowy forest dressed in a winter snowflake ball gown. You already know that Tarsem's new visual master piece will have larger than life costumes when it premieres this March also starring Julia Roberts as the Evil Queen, Nathan Lane as her timid butler and Armie Hammer as the prince, beside Sean Bean as the King (who of course dies in the film). 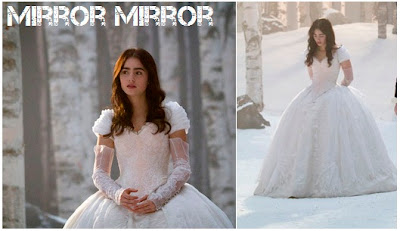