Continuing our delightful Sunday spotlight on lovely animated movies in which we've already covered RISE OF THE GUARDIANS, EPIC, THE CROODS and 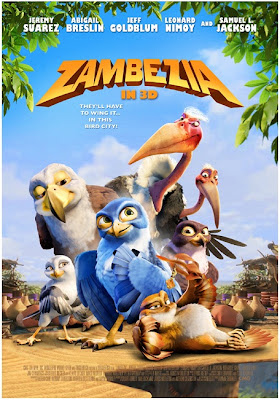 JUSTIN AND THE KNIGHTS OF VALOUR, today I have for you a recommendation from the head of HOLLYWOOD SPY's Nerd Department - Josh, an extremely fun, colourful and exotic animated feature titled ZAMBEZIA, which comes from South Africa and has already hit cinemas in some of European countries while in others it is ready to premiere later this winter. It still doesn't have a release date for United States (the distribution for English speaking countries has been sold to Sony). The film was made on a $20 million budget.


ZAMBEZIA STORY
This delightfully fun and enchantingly vivid animated film has a story set in a bustling bird city on the edge of the majestic Victoria Falls. The lovely story of ZAMBEZIA revolves around Kai, a young but high-

spirited falcon that is brought up by his strict father in an isolated outpost. Kai's life will get completely turned upside down when a strange bird crashes into his small and protected world and tells him of

bird city of ZAMBEZIA. Kai sets on a journey to ZAMBEZIA where he discovers the truth about his origins and, in defending the city, learns how to be part of a community.
ZAMBEZIA CHARACTERS
As you will see the cast of this animated movie is filled with stars who gave their voices to a wonderful gallery of characters: Jeremy Suarez plays Kai, a brave, high-spirited young falcon with an impulsive, daredevil streak that often gets him into trouble. Samuel L. Jackson

is Tendai, a great warrior and a strong-willed, devoted father to Kai who is misguided by the fear of losing his son. Leonard Nimoy is Sekhuru, the founder of Zambezia and a mentor and father-figure for all Zambezians. He is calm under pressure, wise and intuitive. Abigail Breslin (LITTLE MISS SUNSHINE) is Zoe, Sekhuru's adopted

daughter and his natural successor. She has a strong sense of fairness and community but tends to take herself a little too seriously. British thespian Richard E. Grant is Cecil, a particularly ugly Marabou who has a chip on his shoulder about scavengers being excluded from ZAMBEZIA which he hides by 'putting on airs'. Jamal Mixon is

Ezee, who, irreverent and incorrigibly thick-skinned, is unashamedly self-gratifying and prides himself on his ability to enjoy the perks of Zambezia while doing as little work as possible. David Shaughnessy 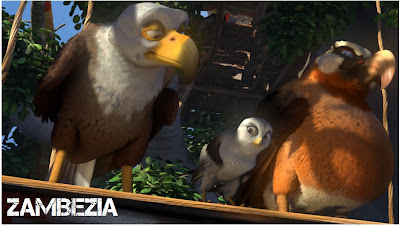 is Morton, simpering in posture, but not in character. Morton is Cecil's runty cousin. He is a bit of a softy and is prone to sentimentality which he has to suppress around Cecil. Jeff Goldblum is also in the voice cast.
Posted by DEZMOND at 12:00 AM