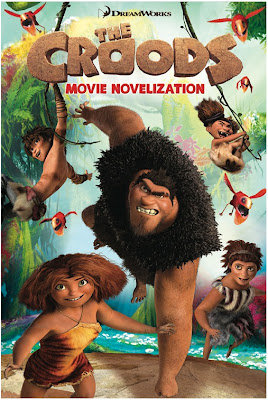 I'm sure you will agree with me, dear people, that in the era of morbidly and irresponsibly dark movies, animated films have become pearls of optimism and inspiration and drop of light in the grim cinematic ocean. From deeply educational HOW TO TRAIN YOUR DRAGON, to delightfully romantic TANGLED and mesmerizingly lovely THE OWLS OF GA'HOOLE, charmingly warm ICE AGE saga, strongly inspiring BRAVE, we shall arrive next year to new Dreamworks' animated story THE CROODS.

THE CROODS STORY
The story of THE CROODS takes us back to the beginning, to a previously undiscovered era known as the Croodacious, a time when Mother Nature was still experimenting and the flora and fauna we know today had yet to evolve and when a man's position as a "Leader of the 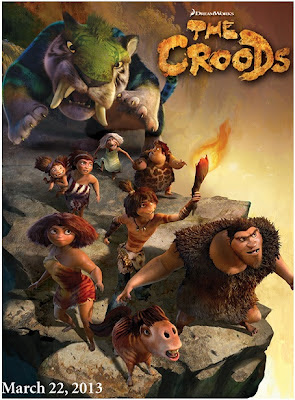 Hunt" was threatened by the arrival of a prehistoric genius who comes up with revolutionary new inventions like fire. At the heart of this comically chaotic world is the Crood family, led by Grug, an over-protective father who, like all dads, is doing everything he can to hold his family together as the world around them changes at a dramatic pace. Surviving in a volcanic world is tough enough, but caveman Grug (Nicolas Cage) gets a rude awakening when an earthquake forces him to leave behind the only world he knows. With his family in tow, he ventures out into the volatile world in search of a new home. The situation becomes even more complicated

when Grug's family — in particular his oldest daughter — falls for a nomad (Ryan Reynolds) they encounter on their dangerous journey. This quirky, imaginative stranger's search for 'tomorrow' is at odds with Grug's reliance on the traditions of yesterday.

THE CROODS TIDBITS
The first Dreamworks' film to be distributed by 20th Century Fox after their separation from Paramount is ready to hit cinemas March 2013 and it will be directed by Chris Sanders, one of the people who worked on LILO AND STITCH and HOW TO TRAIN YOUR DRAGON. It is interesting that THE CROODS took eight years to be made due to many cancellations and breaks in the production.
THE CROODS CAST
The stellar voice cast is lead by Nicolas Cage as Grug, the well-meaning, overprotective but outdated patriarch of the Croods family. Ryan Reynolds is Guy, a boy who is not as strong as the Croods but prefers using his brain and comes up with various ideas, like fire or shoes. He is accompanied with a sloth-like pet. Catherine Keener appears as Ugga, Grug's wife. She is more open-minded than Grug, but has a hard job to make her family 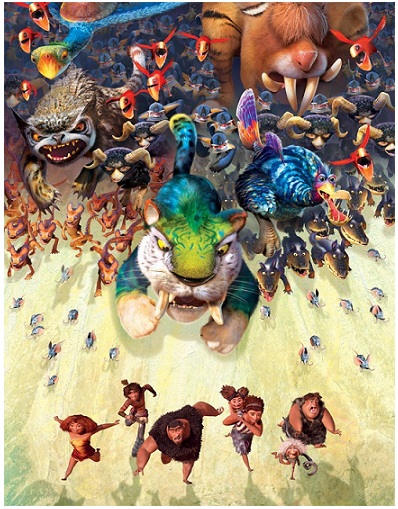 safe. Emma Stone plays Eep, Grug and Ugga's daughter, who likes to experience new things, while Clark Duke is Thunk, Grug and Ugga's son, a 6-foot-9, 320 pounds and 9 years old middle child, who is not smart, has bad coordination but has a good heart. Cloris Leachman is Gran, a ferocious, very old (45 years) mother-in-law, and main antagonist for Grug.
Posted by DEZMOND at 12:00 AM