Here's the first picture of Orlando Bloom as the Duke of Buckingham in the upcoming historical adventure "The Three Musketeers" which is currently being shot in Germany. 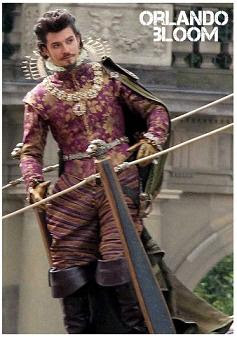 How do you like Orlando's spruced up hair and ornate costume? As you know the rest of the cast includes: Logan Lerman, Christoph Waltz, Ray Stevenson, Luke Evans, Matthew Macfadyen, Mads Mikkelsen, Milla Jovovich...

Now this is just plain horrible if not even disgusting: that obnoxious Sacha Baron Cohen, aka Ali G, aka Borat, will play Freddie Mercury in a biopic about the famous pop icon and the leader of the Queen!!! I mean, what did such a great musician do to deserve to be humiliated by such a horrible actor playing him??? The movie will follow Queen's formative years, which will lead up to the band's performance at Live Aid in 1985 and the producers have the license to use Queen's songs in the film.

Now, I've no idea where did this one come from, I've never heard of it before, but here's an adorable and magical trailer for the steam-punk adventure "The Nutcracker 3D" 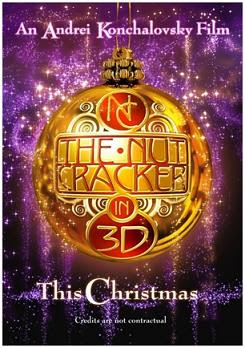 which is coming to cinemas this Holiday season. Directed by famous Russian director Andrei Konchalovsky and starring Elle Fanning, John Turturro, Nathan Lane and Charlie Rowe, this lovely film is set in the 1920s Vienna and follows little Mary who lives in a home filled with lovely things and loneliness. On Christmas Eve, Mary's beloved Uncle Albert arrives with the gift of a wooden nutcracker doll. Later that night, Mary's imagination brings the doll to life. Introducing himself as NC he takes her on a wondrous journey through a stunning dimension where toys assume human form and everything appears ten times larger. But danger lurks. An army of toothy rat creatures, led by the flamboyant Rat King and his devious mother, has unleashed a plot to overthrow humanity. When NC is captured and placed under a paralytic spell, Mary, her brother Max and a spirited band of toy sidekicks must rescue him from the Rat King's clutches and thwart his wicked plans to 'ratify' the world.