After seeing the overly skinny, overly gloomy and overly trashy January Jones yesterday in her first edition as The White Queen in "X-Men: First Class" are you ready for some more really bad super hero costumes? Well, yesterday, "The Daily Mail" has published some secret snapshots of Captain America's costume from the "Captain America: The First Avenger" film which is currently being shot in UK. The first picture shows a stunt double for the main actor Chris Evans riding an army motorcycle through the English countryside and sporting something that looks like a very bad denim suit. Well, at least the shade of brown on his boots and belts is rather nice. Let us hope that Chris Evans will look much better in this suit when he appears in it over at the big screen. 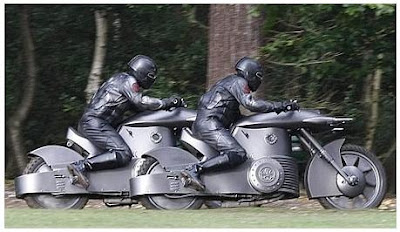 Other two pictures are much more interesting showing some really cool futuristic bikes in silver colour, and a very charming 40's style car.
Starring Chris Evans, Hugo Weaving, Tommy Lee Jones, Sebastian Stan, Dominic Cooper ... "Captain America" will come to cinemas in July 2011 telling the story of a young man who enlists in the US army to fight Nazis in WW2 but gets turned into a superbeing in a secret army experiment and thus becomes Captain America. Armed with his indestructible shield and battle savvy, Captain America starts his war against evil as a sentinel of liberty. 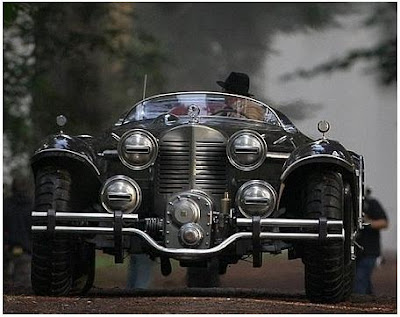