LIAM HEMSWORTH IS "FALLEN" ANGEL. MILLA JOVOVICH IN COSTUME IN "THE THREE MUSKETEERS". HILARIOUS TRAILER FOR "GNOMEO AND JULIET"

Does Liam Hemsworth, the brother of Chris Captain America Hemsworth and the boyfriend of Miley Montana Cyrus, look like an angel to you? Well, he might take the lead role in Disney's FALLEN, a teen fantasy similar to "Twilight" 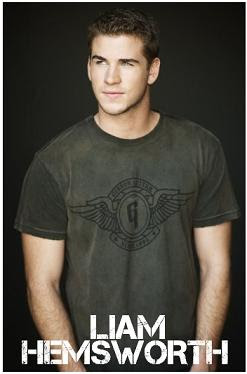 but with fallen angels instead of vampires. This will be an adaptation of the cheesy novel by Lauren Kate about a high school student who experiences forbidden love, and has to choose between two young men who are actually fallen angels who have battled over her for centuries :)) Ah, the story of my life :))) As HOLLYWOOD SPY wrote earlier, young Liam is also playing the lead role in 2011 epic "Arabian Nights".

And as you've already noticed, Paul W.S. Anderson's THE THREE MUSKETEERS is slowly but resolutely shaping up to become the film with the trashiest costumes ever. You've seen Orlando Bloom in frills, feathers and brocade and now take a look at Milla Jovovich's Halloween costume she'll be sporting in the film as Milady De Winter :) 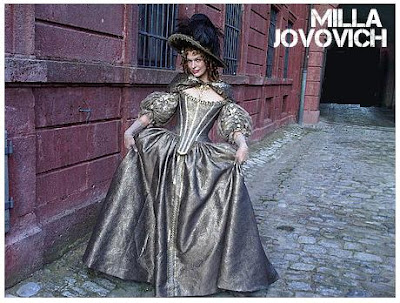 You can also check out the first trailer for the crazy, funny and super charming animated movie GNOMEO AND JULIET which features songs from Elton John and voices from Emily Blunt, James McAvoy, Jason Statham, Michael Cane ... Premiering in February 2011, GNOMEO AND JULIET will be a story about two garden gnomes who have as many obstacles to overcome as their quasi namesakes when they are caught up in a feud between neighbors. But with plastic pink flamingos and thrilling lawnmower races in the mix, can this young couple find a happy ending?
Posted by DEZMOND at 1:38 PM