With almost half a thousand of votes from some charming trolls lurking around, the second part of our BEST BRITISH ACTRESS poll is over :) Refined beauty Thandie Newton has won with 56% of votes,  Kate Winslet took second place with 20%, 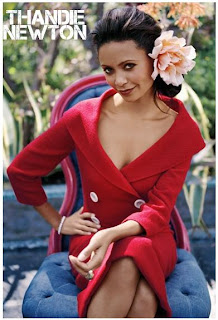 leaving Polly Walker (8%) and Helen Mirren in third and fourth place with Polly scoring just two votes more than Helen. Now methinks you will agree with a strange notion I have that this poll has been hijacked by Thandie Newton's fans, because she probably wouldn't be able to beat experienced and acclaimed actresses such as Helen Mirren, Kate Winslet or Polly Walker in reality, but I won't complain too much :) I do love the beautiful and sensual Thandie.

She basically got world wide fame with her supersexy role in MISSION IMPOSSIBLE 2 alongside Tom Cruise and Dougray Scott. After that she was equally brilliant and mesmerizing as dangerous Dame Vaako alongside Karl Urban and Vin Diesel in THE CHRONICLES OF RIDDICK. She showed her 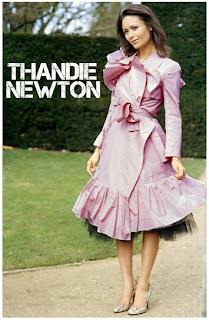 dramatic talent in one of the best films of the last decade THE CRASH by Paul Haggis. After that she didn't have a lot of noticeable roles, but I must admit I remember and love her most for her touching portrayal of African doctor in famous TV show E.R. where she had a tragic love with Noah Whyle. In 2012 she got the chance to play a presidential daughter. In the future we shall watch her in futuristic mystery THE VANISHING ON 7TH STREET alongside Hayden Christensen and then in spooky thriller RETREAT alongside Cillian Murphy and Jamie Bell.
It's interesting that she has a Cambridge degree in anthropology, proving she's not just beautiful but smart as well. She was supposed to be a CHARLIE'S ANGEL instead of Lucy Liu. Would you believe that she is almost 40?
Now, off to our next poll which will be the closing chapter of our BEST BRITISH GENT voting. Eight new distinguished British actors for whom you can vote during next two weeks as much as you like are: Jude Law (SKY CAPTAIN AND THE WORLD OF TOMORROW, ALFIE, SHERLOCK HOLMES), Dougray Scott 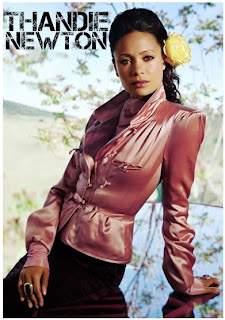 AND A SMALL INFO - you know that I work as a book translator, so if you are interested in seeing how my books actually look like, head over to my dear Vics over at HAIRNETS AND HOPES who has organized a charming game with the covers of my books. So go over to Vics and join the fun :)
Posted by DEZMOND at 10:09 PM