If you ask me - one of the very few of the true American thespians, our dearly beloved Patrick Wilson has just joined AQUAMAN movie in which Jason Momoa will play master of the seas! It seems his whole family will be in it, since, beside Amber Heard who will be playing his wife queen Mera of Atlantis, Patrick will be playing his evil brother and the main villain in the movie. He will be his half brother Orm, or Ocean Master. He is fully human, extremely powerful and wants the throne of Atlantis himself. In other words, he is AQUAMAN's Loki. Willem Dafoe is also in the cast and will be playing scientist from Atlantis Nuidis Vulko! The movie will surf up October 2018. almost two years from now.


CHRIS EVANS'S 'JEKYLL' TO
BE HELMED BY RUBEN FLEISCHER

I can't believe it, but another true American thespian and another of our favourite hunks, Chris Evans, is in the news today as well, talk about a hot post: Ruben Fleischer has been brought to direct him in JEKYLL based on BBC's TV series. It is the modern version of the doctor with split personality who lives in a fortified basement with a psychiatric nurse as his ally. She watches him transform into an alter ego who rages, shows heightened strength and speed and can be a charming, flirtatious scoundrel as well. The two personalities try to co-exist, even though one doesn’t remember what the other does while in control of the body. They use a micro cassette to leave messages for each other. As you know, Universal is preparing another JEKYLL project with Russell Crowe.

'THE LAST WORD' TRAILER
WITH SHIRLEY MACLAINE AND 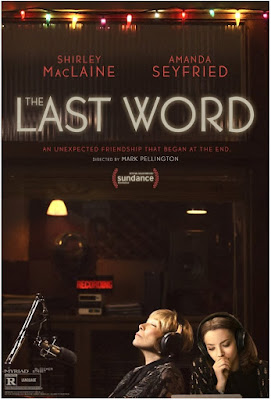 AMANDA SEY- FRIED
And here's the first trailer for March 3rd comedy movie THE LAST WORD in which Shirley MacLaine plays a very successful retired businesswoman who needs to control everything. So she goes to her local newspaper’s obit writer (Amanda Seyfried) with a plan: she basically will co-write her own death notice — you know, to be sure it gets done the right way. But there’s a catch: She isn’t exactly the town’s most popular resident.