NEW 'DUNE' MOVIE TO BE
HELMED BY DENIS VILLENEUVE
I informed you last month that Legendary has bought movie rights on Frank Herbert's sf classic DUNE and now it got Denis Villeneuve for director!

He already helmed Arrival sf movie this year and new Blade Runner.
Planned as a movie franchise DUNE is set in the far future with humanity, having spread beyond Earth to countless other worlds, now ruled over by competing feudal families who control access to a drug called Melange. Known popularly as “spice,” the drug gives its users heightened consciousness and an extended lifespan at the cost of crippling addiction and fatal withdrawal. Spice, use of which makes interstellar travel possible, is found only on the desert planet of Arrakis or Dune ruled by the family of Atreides and as such is the most valuable commodity in the galaxy. 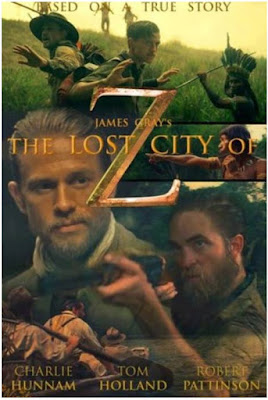 The first teaser trailer has been released today for the adaptation of David Grann's book THE LOST CITY OF Z which describes real events, about British explorer Percy Fawcett (Charlie Hunnam) who made several attempts to find an ancient lost city in the Amazon and finally disappeared in 1925 along with his son in the search for the city. Beside Charlie Hunnam as Colonel Fawcett, the movie also stars Robert Pattinson as his fellow explorer Henry Costin and Sienna Miller as his wife Nina Fawcett! Angus MacFadyen and Tom Holland are also in the cast in the Brad

Pitt produced movie which is scheduled to find its way into cinemas around the world some time next April.