JOAQUIN PHOENIX, OLIVIA WILDE, AMY ADAMS IN "HER"! ZOE SALDANA IS GAMORA IN "GUARDIANS OF THE GALAXY"? "BEFORE MIDNIGHT" TRAILER WITH ETHAN HAWKE & JULIE DELPY! "THE AGE OF MIRACLES" MOVIE ADAPTATION

I mentioned yesterday a couple of new roles that expect Amy Adams in the future, but forgot to mention charming comedy HER in which she will star next to Joaquin Phoenix, Olivia Wilde

and Samantha Morton. It will be a story about a lonely writer who develops an unlikely relationship with his newly purchased operating system that's designed to meet his every need.


THE AGE OF MIRACLES
And it seems that Karen Thompson Walker's bestseller THE AGE OF MIRACLES will get a movie version. To be directed by Catherine Hardwicke ( she made such shallow and empty films out of RED RIDING HOOD and TWILIGHT) the film will be aet amidst an advancing catastrophe after the Earth's rotation mysteriously slows, and will bring a suspenseful and romantic snapshot of one young girl's adolescence, a poignant family drama, and a heartrending glimpse into the everyday tragedies and triumphs that define what it is to be human in a world that might just be ending.


ZOE SALDANA IN GUARDIANS OF THE GALAXY

Rumours around the casting process in the upcoming super hero flick GUARDIANS OF THE GALAXY are still circling around the net: the latest one, coming from Heat Vision Blog, says that STAR TREK's Zoe Saldana is wanted for the role of Gamora! Marvel's  green-skinned assassin is the last of a race that was wiped out by the Baldoon and she is also the adopted daughter of the main villain Thanos! She possesses super-human strength, agility, and healing abilities. The already confirmed cast members include Chris Pratt who takes the lead role of Star-lord, the leader of the Guardians, and Dave Bautista who will play Drax the Destroyer! The film will also have a talking raccoon :) It seems they are toning down the whole film since after all the famous names which were mentioned for some of the roles, they've been choosing less attractive ones so far.

Since I know my ladies loved the previous films, here's the trailer and poster for BEFORE MIDNIGHT, the continuation of BEFORE SUNRISE and BEFORE SUNSET. 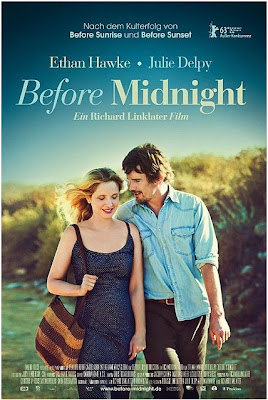 Julie Delpy and Ethan Hawke return to their roles almost twenty years after the first film and this time we meet their characters, Jesse and Celine nine years after BEFORE SUNSET sequel, and they are now in Greece. Almost two decades have passed since their first meeting on that famous train bound for Vienna.The movie is directed by Richard Linklater mostly known for his FAST FOOD NATION movie. I find both the actors and the films terribly boring and lifeless, but I know some of you like them! It escapes me how those films ever became romantic classics with such a lack of any kind of emotions on the faces of the two of them.
Posted by DEZMOND at 12:00 AM