JASON SUDEIKIS
TUMBLEDOWN
Now, here's a cute couple: Jason Sudeikis and Rose Byrne will star together in TUMBLEDOWN! The romantic comedy will revolve around a young widow (Byrne) who falls for a brash New York writer (Sudeikis) who barrels into her rural Maine town to investigate the death of her husband, a folk-music hero. If you follow gossip sites you know that Sudeikis is a part of an equally adorable couple in real life too, since his loved one is gorgeous star Olivia Wilde. But there will be other pretty faces in the cast since lovely Olivia Munn and hunky Joe Manganiello are also in the film alongside Blythe Danner and Beau Bridges! Later this year, Sudeikis is lending his voice in charming animated film EPIC and will also appear next to Jennifer Aniston in WE'RE THE MILLERS as a veteran pot dealer who creates a fake family as part of his plan to move a huge shipment of weed into the U.S. from Mexico!


One of the upcoming movie adaptations I've mentioned before HEAVEN IS FOR REAL has a new cast member. The big screen version of  Todd Burpo and Lynn Vincent’s bestseller "Heaven Is For Real: A Little Boy’s Astounding Story of His Trip To Heaven And Back" will have gorgeous Kelly Reilly from SHERLOCK HOLMES playing the lead role of a mother of a boy who emerges from an operation claiming to have been to heaven! Directed by BRAVEHEART's Randall Wallace will also star Greg Kinnear as the father of the 4-year-old son who returns from near-death with stories of visiting heaven. In this real life story, nobody believed the boy until he shared information learned during his experience that he couldn’t have known.

Our Monday trailer is the first clip for upcoming comedy drama CRAZY KIND OF LOVE which has quite a lovely cast lead by gorgeous Virginia Madsen, superdashing Zach Gilford, lovely 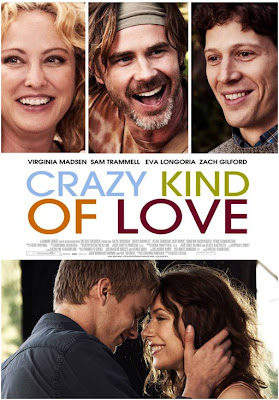 Madeline Zima, Anthony LaPaglia, stunning Eva Longoria and Sam Trammell.  Directed by Sarah Siegel Magness and based on a 1995 novel "Angel Angel" by April Stevens, the story of the movie focuses on a broken family which finds their relationships to one another changed by a new arrival in the household. While re-evaluating her life as a newly single mother, a woman relies on her carefree son and his awkward brother to keep their lives interesting. When an unlikely romance blossoms between the youngest son and the new girl in town, she realizes the key to her happiness can be found where she least expects it, and there’s only one kind of love worth living for - the crazy kind.
Posted by DEZMOND at 12:00 AM