The movie adaptation of fantasy bestseller THE MAZE RUNNER has got two leading stars!  The big screen adaptation of James Dashner's young adult novel, set in a post apocalyptic world, and centring on a teenage boy who wakes up in

a strange community remembering only his first name, will have Will Poulter (NARNIA: DAWN TREADER) and Kaya Scodelario (CLASH OF THE TITANS, SKINS) in the lead roles. They will play fellow prisoners who struggle to unlock the secrets of the maze that surrounds this mysterious community.


MOVIE NEWS
In short casting news: Ray Stevenson has joined Kate Winslet, Jai Courtney, Theo  James and Maggie Q in DIVERGENT fantasy film set in a future world where people are divided into distinct factions based on their personalities. Historical epic POMPEII has cast Jessica Lucas who will join Kit Harrington, Emily Browning and Keifer Sutherland in a love story between a slave and a slavemaster's daughter. Lucas will play Emily Browning's slave and a confidante. MATRIX star Carrie Anne Moss has also joined the epic film and will play Emily Browning's mother. Meanwhile, Disney has bought a script for LABYRINTH, which follows the journey of the mythical princess who must enter the complex and dangerous Labyrinth to save her father.

JONAS ARMSTRONG IN 'THE WHALE' EPIC FILM
In television news today, BBC reports that they have found their lead star for THE WHALE drama! Jonas Armstrong, who played the title role in BBC's famous epic series ROBIN HOOD and whom we missed a lot, will lead the cast in the 90 minute television film which follows the ill-fated voyage of the famous The Essex ship which inspired the events in MOBY DICK novel after one of the survivors of the Essex shipwreck described his experiences in great detail giving Herman Melville material for his MOBY DICK story!  Armstrong will play First Mate Owen Chase alongside Adam Rayner (Hunted), Paul Kaye (Game of Thrones), David Gyasi (Cloud Atlas) and Joe Armstrong (The Village). At the emotional heart of the drama is orphan Nickerson's (newcomer Charles Furness) coming of-age story where he meets three powerful male role models in the captain, the first mate, and a steward. As the narrative develops his views on what makes a man switches dramatically as he sees how these role models respond under some of life's most extreme pressures. 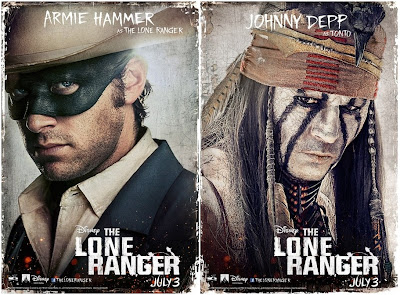 sidekick Tonto.  Directed by Gore Verbinski, this big-budget action movie shows how the Texas Ranger is transformed into the masked vigilante by his trusted sidekick Tonto (Johnny Depp), as they bring their own form of justice to the Old West. The film is out this July! You can also see Helena Bonham Carter poster from the film over at HOLLYWOOD SPY FACEBOOK PAGE!
Posted by DEZMOND at 12:00 AM