In my recent, very successful, spotlight on the boys of SPARTACUS WAR OF THE DAMNED, I've commented how the lead actor Liam McIntyre was the only from the cast without a future project, but now that has changed: according to "The Hollywood Reporter" he will remain in sandals and with a sword in his hand since he will join HERCULES 3D, an epic love story in which Kellan Lutz plays the lead in the $70 million love story between Greek demigod Hercules and the mortal princess of Crete. Liam McIntyre will play young army captain Sotiris, who is initially an antagonist of the mythical hero Hercules. The two of them become close friends before being sold into slavery by a treacherous king. The film hits cinemas March 2014, a few months before Dwayne Johnson's HERCULES THRACIAN WARS (which also has Joseph Fiennes, Ian McShane and Rufus Sewell in the cast).


FLYING TIGERS
NEW JOHN WOO EPIC SERIES
In television news today, famous John Woo has a very ambitious project: FLYING TIGERS will be made in the form of two cinema 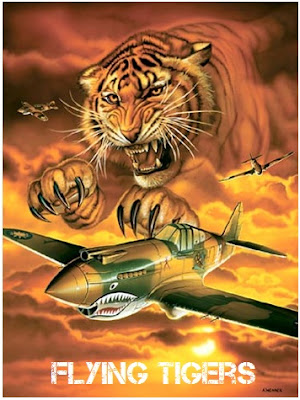 films in China and in the form of a 6 part mini series for international viewers. To be shot in English,  the story will, according to "Deadline", follow the volunteer fighter squadron formed by General Claire Chennault to help the Chinese fight against Japan before the U.S. entered WWII! The ageing Chinese planes were no match for the superior Japanese forces, until the volunteers arrived in American-made P-40 War Hawks. The two squadrons flew side by side, in fighter planes emblazoned with the gaping tiger’s teeth logo.


NEW POSTERS
STAR TREK INTO DARKNESS
Today, you can also check out brand new character posters for next month's science fiction adventure STAR TREK INTO DARKNESS along with a great new clip featuring half of the cast in hot tight spandex suits :) Starring Chris Pine as Captain Kirk, Zachary Quinto as 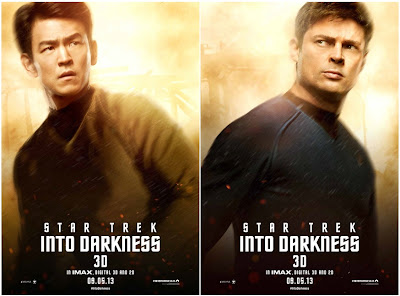 Spock, Karl Urban as Doctor Bones, Zoe Saldana as Uhura, John Cho as Sulu, Anton Yelchin as Chekov and Benedict Cumberbatch as the villain, a one man weapon of mass destruction. When the crew of the Enterprise is called back home, they find an unstoppable force 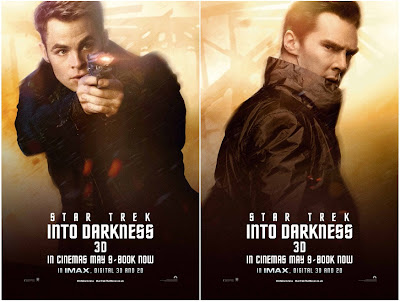 of terror from within their own organization has detonated the fleet and everything it stands for, leaving our world in a state of crisis. With a personal score to settle, Captain Kirk leads a manhunt to a war-zone world to capture a one man weapon of mass destruction. 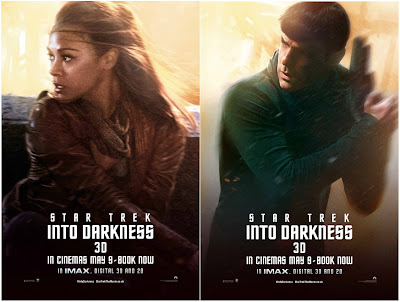 As our heroes are propelled into an epic chess game of life and death, love will be challenged, friendships will be torn apart, and sacrifices must be made for the only family Kirk has left: his crew.
Posted by DEZMOND at 12:00 AM