Ah, so here's an uber weird duo for you: "The Wrap" reports that Nicolas Cage and Hayden Christensen (is he still working?) are set to star

in OUTCAST. Budgeted at $25 million, the film is set in 10th Century China, and follows a warrior who attempts to redeem himself by saving a princess. It is currently not known who of the two of them will play the warrior and who will be the princess :) Meanwhile, Michael Curtis (MY WEEK WITH MARILYN) will do a movie adaptation of Edith Wharton's novel BUCCA- NEERS about five wealthy, ambitious American socialites who tire of trying to find suitable husbands in New York. So they head to England to take part in the London season and track down landed but impoverished gentlemen who would make likely matches.

marshal who starts receiving text messages from someone claiming to be on the same flight, and who is threatening to kill its passengers. Racing against the clock, Neeson's character must identify and stop the killer. The same website reports about Ralph Fiennes, whom you will soon be watching in new James Bond movie, joining the cast of THE GRAND BUDAPEST HOTEL. Set in Europe, the film will, off course, deal with the guests and employees of the Hungarian hotel. Fiennes is set to play a character named M. Gustave, who serves as the hotel's perfectly composed concierge. The cast also includes Bill Murray, Edward Norton, Jeff Goldbloom, Adrien Brody, Willem Dafoe  and Jude Law. Angela Lansbury and Johnny Depp have, in the meantime, left the project.


"HITCHCOCK" TRAILER
Here's something that will most definitely win lots of Oscars next year: the first, long awaited, trailer for ensemble drama with elements of comedy HITCHCOCK. The movie brings a love story about one of the most influential film makers of the last century, Alfred Hitchcock, and his wife and partner Alma Reville with whom he was married for more than 50 years until his death.  She also collaborated with him on some of his movies and was his editor and advisor. The film actually takes place during the making of Hitchcock's seminal movie PSYCHO and depicts both his professional and private problems which he had to overcome in order to shoot his legendary movie. The marvellous cast is lead by Anthony Hopkins in stunning portrayal of the famous director, British thespian Helen Mirren is outstanding in the role of his witty and ironic wife, Scarlett Johannson plays Hollywood diva Janet Leigh, Jessica Biel is Vera Miles, Toni Collette is Hitchcock's assistant Peggy Robertson, James D'Arcy is Anthony 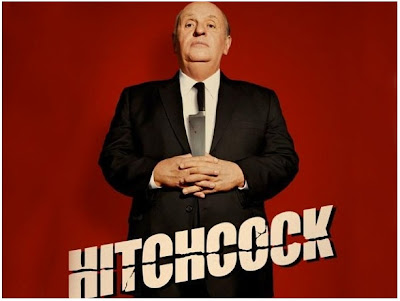 Perkins.... The film premiers at Los Angeles film festival on November 1st and then hits American cinemas later the same month. It is interesting that we have another film on the famous director coming out this year: THE GIRL which focuses on Hitchcock's (Toby Jones) work with Tippi Hedren (Sienna Miller) who claims to be provoked and molested by the director during her career.
Posted by DEZMOND at 12:00 AM