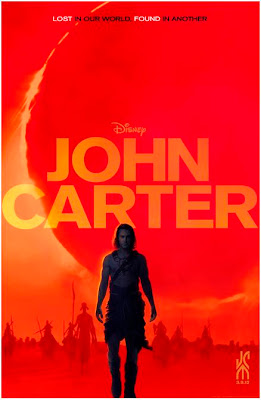 It's here, it's here, it's here, the eagerly awaited 2nd trailer for next year's biggest epic film JOHN CARTER has been released today and this means that the marketing campaign for this huge sf blockbuster is finally moving on with some speed. Check the absolutely mind blowing, totally stunning and utterly epic new trailer beneath the spotlight on the film! I swear I couldn't even blink while watching it (about 20 times so far :) This will be the epic adventure of the decade! The net is swept today with positive reactions on the trailer.

JOHN CARTER STORY
This sweeping action-adventure set on the mysterious and exotic planet of Barsoom (Mars) is based on a classic novel by Edgar Rice Burroughs, whose highly imaginative adventures served as inspiration for many filmmakers, both past and present. The film tells the story of war-weary, former military captain John Carter

(Taylor Kitsch), who is inexplicably transported to Mars where he discovers a lush, wildly diverse planet whose main inhabitants are 12-foot tall green barbarians. Finding himself a prisoner of these creatures, he escapes, only to encounter Dejah Thoris,

Princess of Helium, who is in desperate need of a savior. He will also encounter formidable alien creatures resembling the beasts of ancient myth and he will become reluctantly embroiled in a conflict of epic proportions amongst the inhabitants of the planet,

including Tars Tarkas (Willem Dafoe) and the captivating Princess Dejah Thoris (Lynn Collins). In a world on the brink of collapse, Carter rediscovers his humanity when he realizes that the survival of Barsoom and its people rests in his hands.

godlike status, you can see him in the trailer with stunning blue eyes), Willem Dafoe (Tars Tarkas, a 10-foot tall, four armed green Martian), James Purefoy (Kantos Kan, the captain of the kingdom of Helium's grand warship), Ciarán Hinds (Tardos Mors), Dominic West (Sab Than, a prince who believes he is entitled to

JOHN CARTER TIDBITS
This is the first live action film of amazing Oscar winner Andrew Stanton who brought us some of the most touching animated classics from WALL-E,  to FINDING NEMO and A BUG'S LIFE.

The number is not official, but it is rumored that this could be one of the most expensive films in history with the budget reaching almost $300 million which means that Disney needs to make it the biggest blockbuster in March 2012 when it premieres in order to bring back all the money! The original name of the film was JOHN CARTER OF MARS, but Disney opted for a shorter name since

films containing word "Mars" in the title, weren't successful at the box office so far. Some of the actors who were considered for the lead role instead of Taylor Kitsch include MAD MEN'S Jon Ham and Josh Duhamel. Robert Rodriguez was the first director to tackle this project with the idea of hiring, now late, Frank

Frazetta as production designer. It is interesting that this film has been in development for the longest time in history - 81 years, since the first idea of a movie adaptation was born back in 1931, when there was a plan to make world's first animated film ever out of it! This is also the first live action film in which Pixar is involved!