The last trailer I have for you, my little freaks, in this year, is the latest international trailer for SNOW WHITE AND THE HUNTSMAN 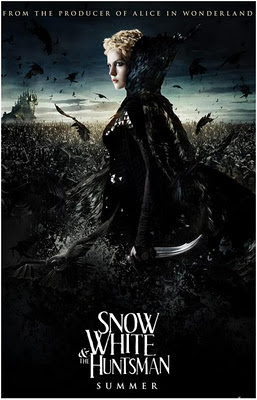 which hits cinemas in June next year, about two months after Tarsem's rival project MIRROR MIRROR robs US box offices. The new Russian trailer bellow offers some scenes we haven't seen in the first official trailer earlier this year. It also promises some really mind blowing scenes,  spectacular visuals and awe-striking sets. The film might be really good, off course if you can stand Kristen Stewart, as most people can't, and if you can swallow the ridiculous part which defies all laws of logic and nature in which mirror says to Charlize Theron that Stewart is prettier than her :) Yep, and me is prettier than Chris Hemsworth :) 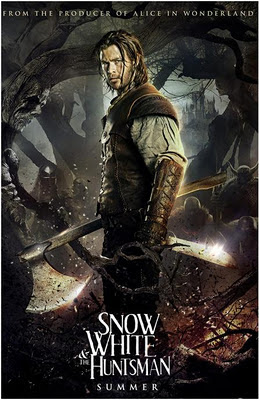 The story of the SNOW WHITE AND THE HUNTSMAN will bring a gritty new take on the legendary fairy tale in which the Huntsman (played by Thor himself Chris Hemsworth) has an expanded role from the one in the classic fairy tale. In the original story, he is ordered to take Snow White into the woods, kill her and bring her heart to the Evil Queen Ravenna (here played by Charlize Theron who looks rather magnificent in the costume), but instead lets her go. But in SNOW WHITE AND THE HUNTSMAN the two will be chained together for part of the movie as they make their escape. But this doesn't mean that the Huntsman is Snow White's love interest,

because the prince is still in the story (prince Charmant is played by super charismatic Sam Claflin from PILLARS OF THE EARTH and PIRATES OF THE CARIBBEAN). The huntsman here has a task of being Snow White's mentor, teaching the teen girl to fight and survive and teaching her how to fight back the Evil Queen. The cast also includes Ian McShane, Bob Hoskins, Lily Cole and Toby Jones.

SNOW WHITE TIDBITS
All seven dwarves in SNOW WHITE AND THE HUNTSMAN carry the names of famous Roman emperors which means that Ian McShane appears as Caesar, Eddie Izzard as Tiberius, Bob Hoskins as Constantine, Toby Jones as Claudius, Eddie Marsan as Hadrian, Stephen Graham as Nero, Ray Winstone as Trajan and Nick Frost as Gus (short from Augustus).

The idea of the studio is to make this one into a trilogy of films. It is interesting that both MIRROR MIRROR and SNOW WHITE AND THE HUNTSMAN are more focusing on the Evil Queens and the strong charisma's of Charlize Theron and Julia Roberts than on Snow Whites.

Before Chris Hemsworth got the role of the Huntsman, the strong contenders were Michael Fassbender, Tom Hardy and at one point even Johnny Depp, but for a long time Viggo Mortensen was almost 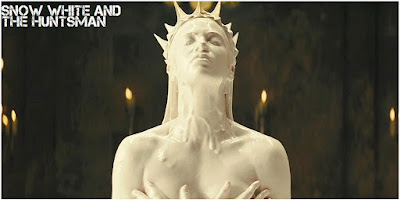 locked for the role, but he decided to leave the project which wasn't promising at all at the time after which Hugh Jackman was the second huge star to refuse the role. 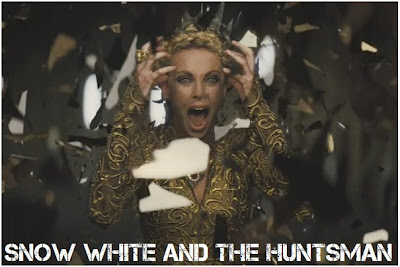 The first choice for the Evil Queen was Angelina Jolie, while Saoirse Ronan and Emily Browning competed for the Snow White role, and even Lily Collins, who got the role in MIRROR MIRROR, auditioned for this one.

Director of the film, Rupert Sanders, has never helmed a film before this one. The brilliant costumes were designed by famous Colleen Atwood who won Oscars for ALICE IN WONDERLAND, MEMOIRS OF A GEISHA and CHICAGO.
Posted by DEZMOND at 12:00 AM