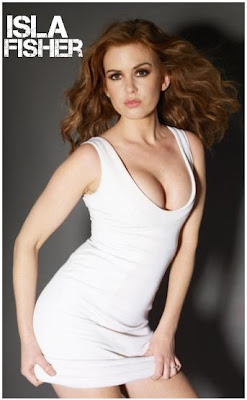 Universal is preparing DESPERADOS, a comedy which will have lovely Isla Fisher (CONFESSIONS OF A SHOPAHOLIC, and you can hear her in RANGO currently)  as the lead star.  The film, which is supposed to be a female HANGOVER, will revolve around a woman who sends an indignant email to her new boyfriend, who has gone silent after they had sex, only to discover he's comatose in a Mexican hospital. Panicking, she races south of the border with her friends in tow to intercept the email before he recovers.

SHORT HEADLINES Today you can check out a brand new poster for THOR. Premiering May 6th, and following the adventures of the famous Norse super hero, the film will star Chris Hemsworth and Anthony Hopkins and is 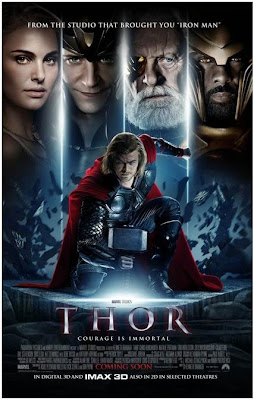 directed by Kenneth Branagh. *Christina Applegate is preparing a new sitcom with NBC. She will play a working mother who has to deal with her stay-at-home husband and parents, in this new untitled comedy show. *Tommy Lee Jones will probably join Meryl Streep and Steve Carell in GREAT HOPE SPRINGS, a film about a couple which has problems after 30 years of marriage so they decide to put their future in the hands of a marriage counselor for one weekend. *Shia LaBeouf will star in HORNS, in which the crazy plot revolves around a guy who wakes up after a night of hard drinking and discovers there are horns growing out of his head.

Ah, this is seriously awful, NBC has released the first picture (click on it to see it bigger) of Adrienne Palicki as WONDER WOMAN in their upcoming new pilot which will also star Elizabeth Hurley as her enemy and Cary Elwes as her boss. I'm not sure what's worse, the hair which looks shockingly fake or the extremely cheep and plastic looking costume. I seriously hope they are just making a joke with us with this picture! The reactions around the Net are really really bad, and everybody swears they thought this was a picture of some anonymous girl dressed as Wonder Woman for a party.  Produced by David E. Kelley, the show will revolve around Diana Prince who is a corporate executive by day, but turns into a powerful super hero WONDER WOMAN by night to fight crime and villains.
Posted by DEZMOND at 12:00 AM