GUARDIANS OF THE GALAXY 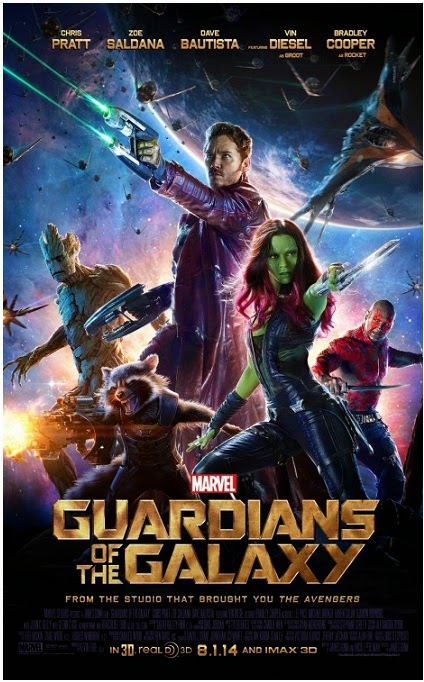 MARVEL'S SUPER TEAM
New character posters have been released for one of this summer's most anticipated science fiction movies GUARDIANS OF THE GALAXY. Scheduled for cinematic release in August 2014, the movie will be set in space following an American pilot and a group of futuristic ex-cons who go on the run with a highly coveted object. Their common goal will turn them from the unlikely band of cons into superheroes and guardians of the galaxy.


STAR LORD
THE LEADER OF THE GUARDIANS Peter Quill aka Star-Lord is played by Chris Pratt. The leader of the Guardians who left Earth in the mid-1980's. He had a hard time as a kid, And now he goes around space, making out with hot alien girls and only through teaming up with the rest of the outcasts, he finds a higher purpose for himself! After stealing a mysterious orb in the far reaches of outer space, Peter Quill, a half human half alien is now the main target of a manhunt lead by the villain known as Ronan the Accuser. To help fight Ronan and his team and save the galaxy from his power, Quill creates a team known as the GUARDIANS OF THE GALAXY to save the world. 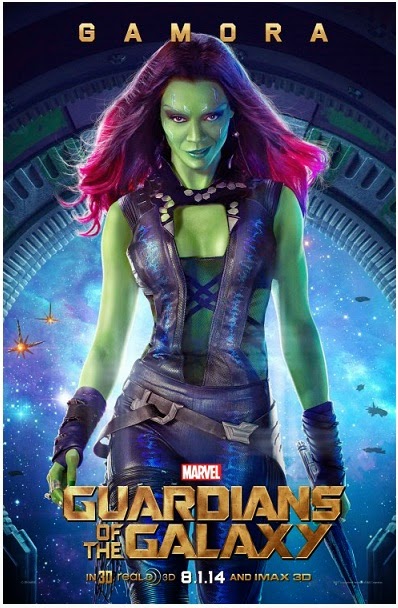 Gamora is played by Zoe Saldana, she is the adopted daughter of Thanos (she's an orphan from an alien world who was trained by Thanos to be his personal assassin and she now seeks redemption from her past crimes.) and an associate of Ronan (two of the film's villains) who tries to find a new path for herself. But she has such a reputation as the deadliest woman in the galaxy that people aren't greeting her with open arms. 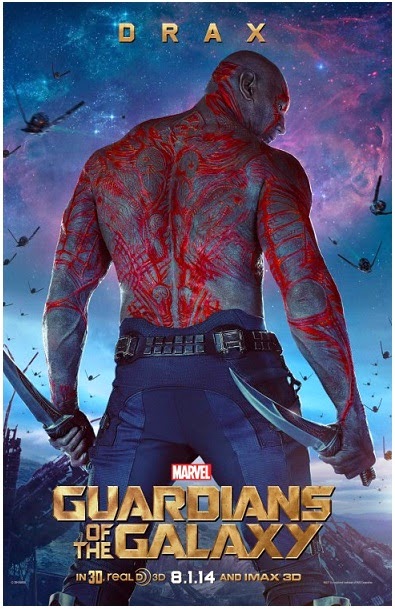 VENGE- FUL WARRIOR
Drax the Destroyer is played by wrestling champion and actor Dave Bautista. He is a warrior in search of vengeance against Ronan and his only goal is to find him and kill him because he destroyed his family. Bautista's makeup took approximately four hours to be applied, but they were able to remove it in 90 minutes. 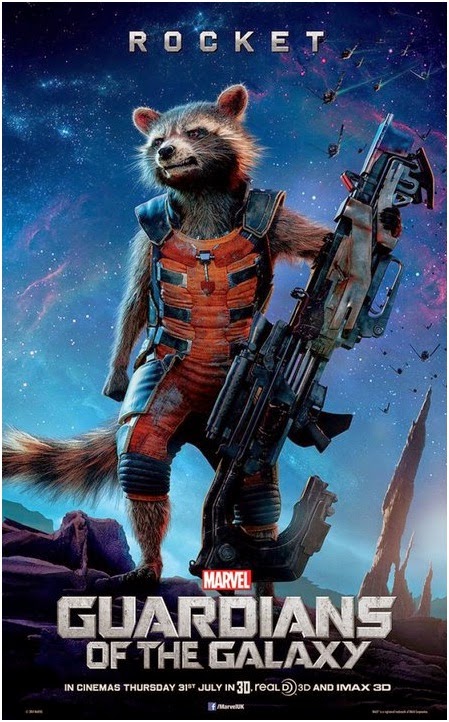 DON'T MESS WITH THE COON!

Rocket Raccoon, one of the most unique animal characters in comic book world, will get his voice from Bradley Cooper!  A genetically engineered fast talking weapon loving raccoon who is an expert marksman and master tactician. He's an experiment from one part of the galaxy! The director of the film worked with real raccoons to get the feel for the character. 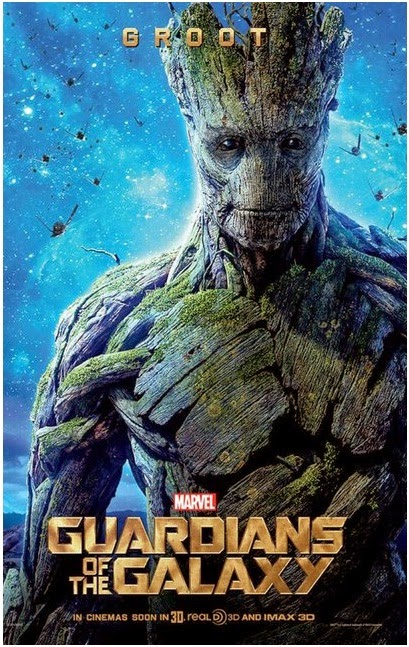 SWEET AND DEADLY
Groot will be voiced by Vin Diesel. Groot is a species that happens to look like trees look, and is quite communicative if you can understand the different inflections in the way he says, 'I am Groot'. The tree-like humanoid is actually Rocket's accomplice. He is described as an innocent fella who is a hundred percent deadly, a hundred percent sweet.


GUARDIANS OF THE GALAXY
THE INTERGALACTIC CAST
Other characters include Ronan the Accuser played by Lee Pace, who originally auditioned for Star-Lord.  He is Thanos' admiral who hunts down the Guardians. He has a help in Nebula, played by Karen 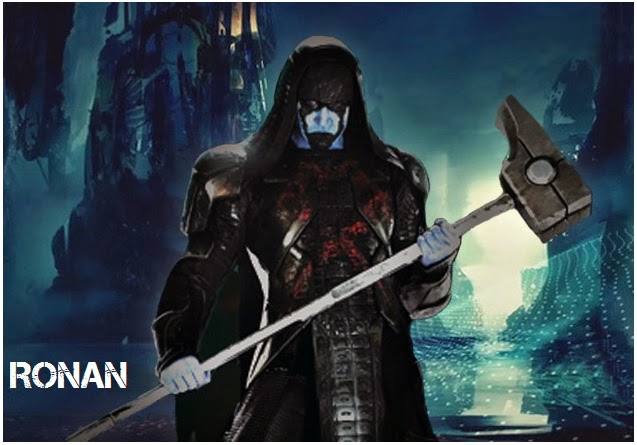 Gillan, who has a complex relationship with Gamora especially; in Korath played by Djimon Hounsou, and The Collector played by Benicio del Toro. Michael Rooker from THE WALKING DEAD 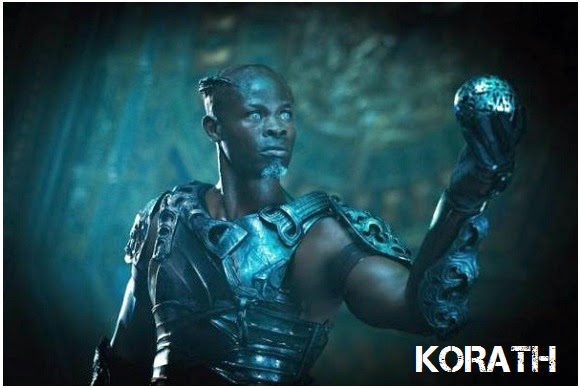 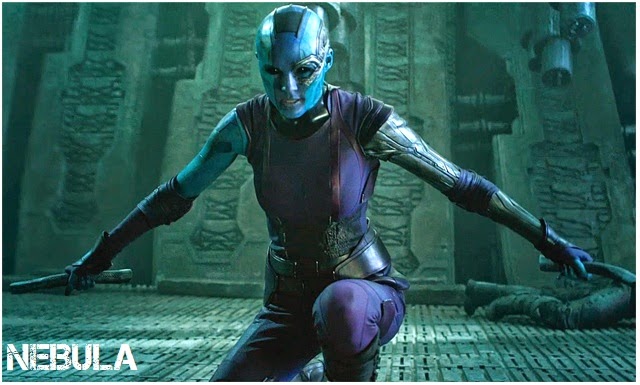 Tyler Bates, the composer of the music in 300 epic, who will be scoring music for GUARDIANS OF THE GALAXY too! James Gunn is directing the movie.

GALACTIC TIDBITS
Karen Gillan shaved her head for the role of Nebula. Olivia Wilde and Rachel Nichols were first choices for Gamora, while all possible young 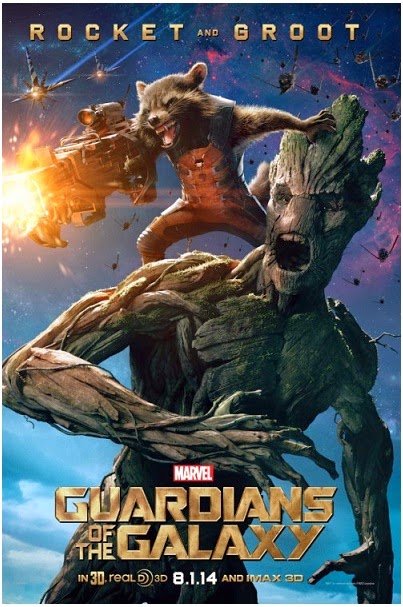