SANDRA BULLOCK
IS THE QUEEN OF TUPPER- WARE MARKETING IN A NEW MOVIE
If you're wondering what's Sandra Bullock been up to, she is heading towards kitchen: she will star in the big screen adaptation of Bob Kealing's book TUPPERWARE UNSEALED as the expert who launched Tupperware through famous parties that made the storage product a household name and into the multibillion company it still is today. 'Deadline' reports that Tate Taylor (The Help, Get On Up) will adapt, produce and direct this fun story about a divorcee from Detroit who convinced a plastics inventor to let her go crazy marketing a good product which, up until then, was getting little attention from consumers. The story will focus on her start and the clashes that she had with the company founder Tupper that led to her leaving the company (she left when he sold the company for $15 million, offering her only $35,000 as compensation).

And in TV news today it seems that Joseph Fiennes will again go psychic after miserably failing with his neurotic depiction of Merlin in CAMELOT. He will play the lead role in new television series on famous NOSTRADAMUS! Carnival Films, who are behind DOWNTON ABBEY, are making the historical series about the seer in 16th century France who became world renowned for his self professed ability to predict the future. With story set against the world of the French Royal Court, NOSTRADAMUS will be a complex, brooding character with immense appetites, a charismatic and self destructive man who is plagued with dangerous and disturbing visions and who seeks vengeance for the murder of his family. As you know you can also see the famous clairvoyant in CW's REIGN historical show. 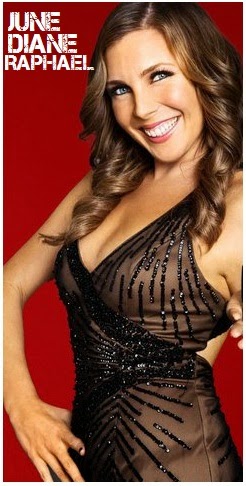 FRANKIE' SITCOM
Over at Netflix, June Diane Raphael has joined the cast of hilarious new sitcom GRACE AND FRANKIE which will see Jane Fonda and Lily Tomlin playing long-time rivals who form a bond when their husbands declare their love for each other. In the Marta Kauffman (FRIENDS) created comedy series Martin Sheen and Sam Waterston will play the newly gay husbands, while Raphael has been cast as the daughter of Grace (Fonda) and Robert (Sheen), who has always rebelled against Grace's insistence on keeping up appearances, but finds that her own bluntness serves her well when she takes over her mother's beauty line.
Posted by DEZMOND at 2:00 PM