A few days ago I reported that Irish thespian Jonathan Rhys Meyers is about to take the lead role in NBC's epic series DRACULA, and there are now news that he will take a role in the movie adaptation of fantasy saga THE MORTAL INSTRUMENTS. In the story about a girl (to be played by MIRROR MIRROR's Lilly Collins) who finds out that she is the descendant of half-angel warriors called Shadowhunters and joins the battle against demons, Rhys Meyers will play Valentine Morgenstern, a powerful Shadowhunter looking to purify the world at any cost.

HOLLYWOOD SPY HEADLINES
Another hunk that my ladies like, Ryan Reynolds has added another less ambitious project to his future gigs: according to "Deadline" he will

star in QUEEN OF THE NIGHT, as a dad whose daughter is abducted, and then years later he discovers a series of clues that leads him to believe the girl is still alive. The film will be directed by Atom Egoyan. Meanwhile, the Brits are preparing animated adaptation of Leo Tolstoy's story IVAN THE FOOL. Vanessa Redgrave, Edd Stoppard, Timothy Dalton and Michael Gambon will lend voices in the story about Ivan, the constant object of ridicule, bullied by all those around him. Though various twists of fate, Ivan, good natured and generous stumbles upon unexpected good fortune and those who once ridiculed him must now rely upon Ivan for their own success and survival. Stylishly animated film will tell the story of the triumph of virtue. 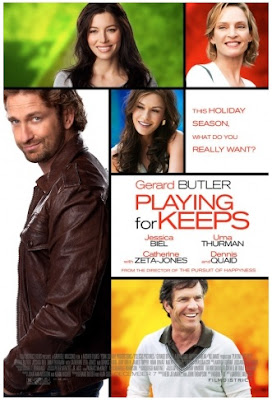 rather stellar cast lead by Gerard Butler and Catherine Zeta Jones. The Scottish star plays a former professional athlete with a weak past and an irresponsible, deadbeat dad who tries to redeem himself by coaching his son's soccer team, only to find himself unable to resist when in scoring position with his players' restless and gorgeous moms. The cast also includes Uma Thurman, Jessica Biel, Dennis Quaid... The estimated budget of the film was $35 million. You might wanna enjoy this one, because the rest of Gerard's future films are pure action and no romance.
Posted by DEZMOND at 12:00 AM