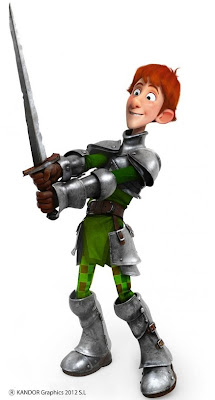 One of the animated films we will be watching in 2013 is JUSTIN AND THE KNIGHTS OF VALOUR. Penned by the writer of THE EMPEROR'S NEW GROOVE, this Spanish animated film to be shot in English language will be set in a magical world that children still dream of, bringing a story about the determination of a kid to reach his dream. It is a tale about friendship, honour and courage. A heart-warming story filled with adventure, action and fun. As you will notice  the voice cast is absolutely amazing!


KNIGHTLY STORY
Justin (Freddie Highmore) lives in a kingdom where bureaucrats rule and knights have been ousted. He wants to be a knight but his father, Reginald (Alfred Molina), the chief counsel to the Queen (Olivia Williams), wants his son to follow in his footsteps and become 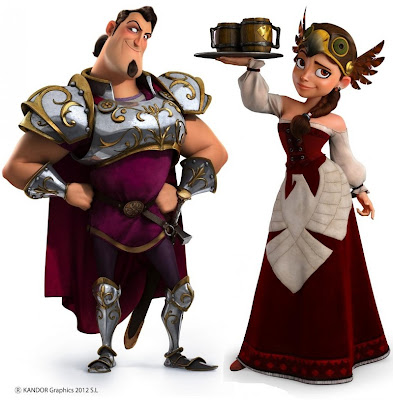 a lawyer. In need of guidance, Justin visits his Grandmother (Julie Walters), who tells him the story of his Grandfather, Sir Roland. Sir Roland was the noblest knight in the kingdom and protector of the King until they were both betrayed and killed by the evil Sir Heraclio (Mark Strong). Against his father’s wishes, Justin runs away in search of his dream and begins his quest to become a Knight.

At The Broken Eagle Inn he meets Talia (Saoirse Ronan), a beautiful, feisty and independently-minded girl, who shares his aspirations and whom he eventually falls for. He also meets a quirky wizard called Melquiades (David Walliams) who tells him where he can find the magical Abbey where the Knights of Valour once trained.

At the Abbey, he is mentored by three ancient monks. Blucher (James Cosmo) instructs him in knightly ways; Legantir (Charles Dance) teaches him there is still magic in the world; and Braulio (Barry Humphries) who creates magical contraptions, and is responsible for Gustav, the gas-powered wannabe-dragon crocodile (LOL).

Justin, though an unlikely candidate for knighthood, is determined to pursue his ideals. Called upon to prove himself when Heraclio and his minions, lead by Sota (Rupert Everett), return and threaten the kingdom, Justin saves the day.