Big casting update for the new romantic drama THIRD PERSON which will be directed by Oscar winner Paul Haggis (CRASH) who also wrote the story: as "Variety" reports Mila Kunis, James Franco and Casey Affleck have joined Liam Neeson and Olivia Wilde in the film which follows the inter-connected stories of three couples all living in different cities, Rome, Paris, and New York. Each couple and city represent different phases of a relationship, with Rome representing the beginning, Paris the middle, and New York the end. Liam Neeson and Olivia Wilde will portray the Paris couple, a pair of writers, while Mila Kunis and James Franco will play the troubled New York couple. Casey Affleck will play a part of the new couple who take a road trip through Italy.

HOLLY WOOD SPY HEAD LINES
Beside the story on Noah in sf epic with Russell Crowe, it seems we shall get another Biblical story on the big screen: according to "Deadline", Warner Bros. will put a 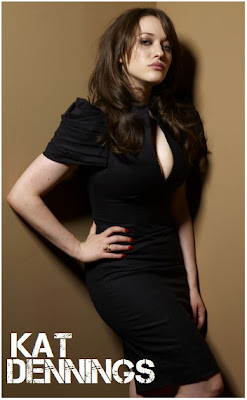 new spin on PONTIUS PILATE. Produced by BREAKING BAD producer, the story of the film follows the entire life of Lucius Pontius Pilate, the son of a Roman knight and a cunning warrior in his own right. He is assigned to become the prefect of Judea, where his arrogance clouds his judgment and causes the public to despise him. This leads to his decision on the fate of Jesus Christ, a man claiming to be the King of the Jews. Good news for all of you who liked last year's hit on the Norse god is that sequel THOR: DARK WORLD will have gorgeous Kat Dennings again in the role of crazy Darcy Lewis. Chris Hemsworth and Tom Hiddleston are leading the cast again.


THE IMPOSSIBLE TRAILER
Last year, I showed you a Spanish trailer for deeply touching movie THE IMPOSSIBLE with Ewan McGregor and Naomi Watts in the lead roles, but now you can check out the English one. They play a family caught in 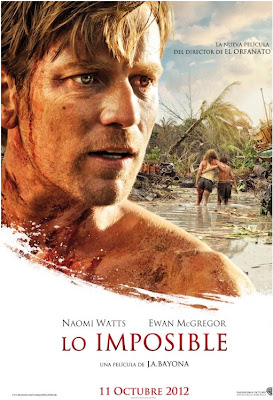 the tsunami that hit Thailand seven years ago: Maria, Henry and their three sons begin their winter vacation in Thailand, looking forward to a few days in tropical paradise. But on the morning of December 26th, as the family relaxes around the pool after their Christmas festivities, a terrifying roar rises up from the centre of the earth. As Maria freezes in fear, a huge wall of black water races across the hotel grounds toward her.
Henry grabs the two youngest boys, but it’s too late: the wave smashes into him with incredible force and dislodges his grip. Maria is pushed

underwater, where she is crushed and battered by debris to the brink of death. She finally surfaces in a raging black sea, which has completely submerged her three-story hotel and the surrounding landscape. Maria gasps for breath while she tries to understand what has just happened, 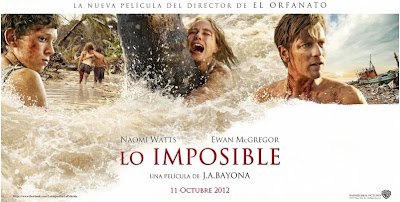 convinced that her family has been obliterated in the blink of an eye. But then, her eldest son, surfaces a few meters ahead in the wild flood. Face-to-face with something unexpected and incomprehensible, she must fight against all odds for her child’s survival. And her own.
Posted by DEZMOND at 12:00 AM