We've just had the amazing epic series THE HOLLOW CROWN over at BBC with Tom Hiddleston, Jeremy Irons, Ben Whishaw and Patrick Stewart, but British television is ready to bring us more medieval history already. According to "Digital Spy" BBC 2 is preparing a six-part television adaptation of best seller WOLF HALL. Written by Hilary Mantel, the book has been a huge hit and won the famous Man Booker Prize. Based in the 1520s, England is facing civil war if Henry VIII dies without a male heir. Thomas Cromwell (he was played by James Frain in THE TUDORS) is stepping into the gap left by the King and is prepared to break the rules, wanting to reshape England to his own and Henry VIII's desires. Mmmm, love it, hope they will cast some of the brilliant British actors for the series!


TAI CHI O TRAILER
Earlier this year, I've introduced you to amazing Chinese steam punk epic TAI CHI and now I have the English trailer for you, for the film which will hit cinemas this Fall and will also appear at Toronto Film Festival.  TAI CHI O  mixes fantasy, 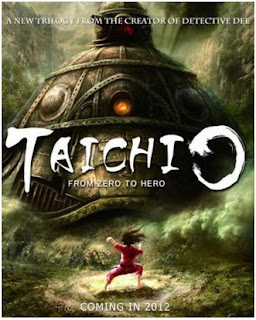 adventure, and steam punk which looks rather interesting in an Asian movie. The film by Stephen Fung, which will be released in USA in early 2013, follows an uncommonly gifted Yang Luchan who has a fleshy abnormality that holds tremendous power growing on his forehead. However, being teased as the town fool, Yang travels to the distant Chen Village to learn TAI CHI. At this legendary village everyone practices TAI CHI and uses TAI CHI in every aspect of their lives. Nevertheless, it is forbidden for a villager to disclose TAI CHI to an outsider, which Yang learns the hard way. Upon arriving at  village,

locals discourage Yang by challenging him with fights. From the strong men to old ladies to children, everyone defeats Yang with their TAI CHI moves. After facing the toughest battle and being defeated by Master Chen’s beautiful daughter Yuniang, Yang is determined to master the art of TAI CHI and goes in search of Master Chen. Little does Yang know,

the poor strange man who he befriended is in fact Master Chen who had saved him from the duel with Yuniang. Master Chen realizes Yang’s genius and disguises himself to secretly guide Yang to his self realization of TAI CHI. One day, a frightening steam-powered machine comes to

the village, lead by Fang Zijing, a childhood friend of Yuniang. He has bribed government officials to permit him to build a railway that will run straight through the village. Yang decides to join forces with Yuniang to defeat Fang Zijing and destroy the machine. This brave act may just win him the hearts of the villagers… PS don't forget to click on the pics, to see all the wonderful detail on them.
Posted by DEZMOND at 12:00 AM