First I have a slate of casting news for you today, people: ultra talented Toni Collette has joined Anthony Hopkins and Helen Mirren in ALFRED HITCHCOCK AND THE MAKING OF PSYCHO which will follow the director's making of the famous horror film. The cast, in which Toni plays Hitchcock's assistant, also includes Scarlett Johansson as Janet Leigh, Jessica Biel as Vera Miles and James D'Arcy as Anthony Perkins. Meanwhile, Akiva Goldsman's complex fantasy film WINTER'S TALE set in the 19th century and following a thief who breaks into a Manhattan mansion and falls in love with the heiress (Jessica Brown Findlay from DOWNTON ABBEY) just before she dies, but then discovers he has the gift of reincarnation, and becomes determined to bring her back to life, now has Aaron Johnson and Garrett Hedlund competing for the lead role, while Will Smith and Russell Crowe are already in the cast of this film mixing reality and fantasy.

I have a few television news for you today as well. First of all, it seems that after Dylan McDermott, who loved taking off his shirt in the show, AMERICAN HORROR STORY will get another famous nudist :) Maroon 5 singer Adam Levine is set to join the second season of the FX's creepy show which follows people living in strange and terrifying houses. Adam will play a contemporary character and half of a couple referred to as "The Lovers", while Zachary Quinto and Jessica Lange are set to return as well but in different roles from the first season. So, people, tell me how much you love ABC's megahit show ONCE UPON A TIME? I know you adore it like moi :) It seems that this Sunday the show will get its first guest star - Sebastian Stan, from CAPTAIN AMERICA and GOSSIP GIRL, who will play "Alice in Wonderland's" Mad Hatter. The episode will describe 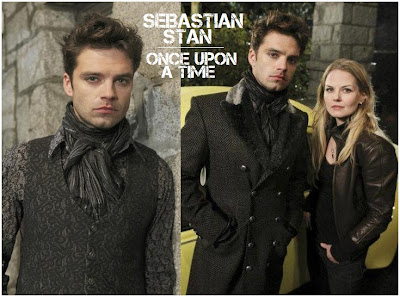 how the Hatter became Mad, and his Storybrooke counterpart will also do some mad things like kidnapping Emma (Jennifer Morrison).

In another piece of TV news, super hot Olivia Wilde will return to HOUSE in the series finale. It is not known how exactly she will be brought into the story, since House has relieved her from her work and the show, but she is coming back for the final episode in May. When it comes to movie adaptations of legendary books, it seems George Orwell's famous novel 1984 will be made into a Ron Howard and Brian Grazer movie. The classic novel takes place in a dystopian society in a perpetual state of war, which in turn leads to a state of paranoia. It follows Winston Smith, who works for a government branch called the Ministry of Truth, where he alters facts and histories but secretly harbors desires of rebellion (as well as desires of a forbidden love affair).
Posted by DEZMOND at 12:00 AM