A future project we can't wait to see is WWII epic THE RAILWAY MAN with Colin Firth as Eric Lomax, a second Lieutenant in the Royal Corp of Signals who was captured in 1942 by the Japanese army in Singapore. He was forced to work on the 'death railway' with hundreds of other prisoners of war. The true story will be based on his life as a POW and his mission to seek revenge years later on those who tortured him. The bad news is that Rachel Weisz, who was supposed to play his wife, has just been replaced by Nicole Kidman :( The cast will also include Jeremy Irvine (WAR HORSE) as the younger Lomax. The film will be directed by Jonathan Teplitzky who helmed the amazing film BURNING MAN with Matthew Goode.


HOLLYWOOD SPY HEADLINES
According to "Variety" Emmy Rossum, whom I haven't seen in ages ever since PHANTOM OF THE OPERA, has joined Emma Thompson and Viola Davis in BEAUTIFUL CREATURES, the movie adaptation of Kami Garcia and Margaret Stohl's saga 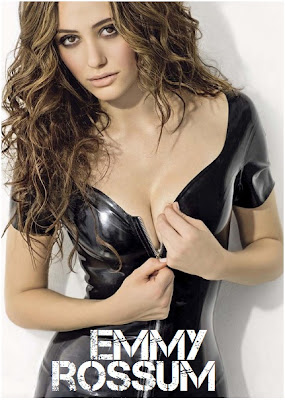 about two teens who must confront a curse that has haunted the girl's family for generations. As I've reported earlier, Emma Thompson will play a dual role of a small town religious zealot and a dark witch, while the two teens will be played by Jack O'Connell and Alice Englert. Emmy Rossum will play the girl's cousin who becomes a dark witch too. Meanwhile, the news I reported last month has now been officially confirmed: THE KILLING star Joel Kinnaman has been signed as the new ROBOCOP, in the role of a cop who gets killed and is then turned into a cyborg cop supposed to clean the streets from criminals.
Another interesting project I've written about before is the directorial debut of famous producer Akiva Goldsman A WINTER'S TALE, a very complex period fantasy thriller based on a novel by Mark Helprin which brings a sweeping drama about reincarnation, set in the early 20th century and focusing on a thief on the run who, when breaking into a wealthy man’s home, strikes up a relationship with the man’s terminally ill daughter. He later learns that he possesses the gift of reincarnation, and becomes determined to save her life.  A flying horse and a time-shift 100 years are elements which also appear in this supernatural story. Russel Crowe is set to play a ruthless criminal, while Will Smith will play a judge, but the update is that we now have a whole slate of younger actors who are mentioned as possible cast members: from THOR's Tom Hiddleston, to Benjamin Walker from ABRAHAM LINCOLN THE VAMPIRE HUNTER and Snow White Lily Collins. They will all do screen tests next week.
Posted by DEZMOND at 12:05 AM