Here's a nice piece of news for all of you who love planetary megahit series DOWNTON ABBEY, and I know there's a lot of you out there :) According to "Deadline" super charming young actor Ed Speleers has signed on to join the

cast as a footman named Jimmy. You already know that Shirley MacLaine has signed on to join the third season of the show, which is currently in production, as mother to Elizabeth McGovern’s Cora Grantham and a foil for Maggie Smith’s irrepressible Dowager Countess. We remember Ed Speleers mostly for his brilliant role in ERAGON, but for some reason his rival in the film, Garrett Hedlund has scored a bigger success later on in Hollywood even though his role was clearly weaker in the epic fantasy movie from 2006. Speleers will appear this year in horror comedy LOVE BITE about a werewolf who prays only on virgins (I kid you not, that's the plot) alongside another stunner Luke Pasqualino (THE BORGIAS) who recently hid his pride and joy from us with a towel :)

Our beloved Cate Blanchett hasn't made any nice films for quite some times now, and the only thing to warm our souls is her appearance as Elven queen Galadriel in Peter Jackson's THE HOBBIT this winter, but it seems she will now take a director's chair too: alongside some other Australian stars like Mia Wasikowska and her colleague from LORD OF THE RINGS David Wenham, Blanchett will direct a segment in the film adaptation of THE TURNING, a collection of short stories by Tim Winton. Speaking of British TV series, one of the upcoming ones will be RIPPER STREET at BBC, an eight part series set in 1899 London, in the aftermath of the Jack The Ripper murders, and it will focus on H Division, the notorious police precinct charged with keeping order in Whitechapel. British star Matthew MacFadyen is taking the lead role alongside GAME OF THRONES Jerome Flynn and MyAnna Buring from the TWILIGHT crapfest :)PS A few days ago we saw the first horrid look of Hugh Jackman from the LES MISERABLES, and now you can click to see how Russell Crowe looks like in the film as Inspector Javert.
After brilliant and mindblowingly spectacular epic fantasy TEARS FOR SALE, touching WW1 saga SAINT GEORGE SHOOTS THE DRAGON, delightful soccer film MONTE VIDEO GOD BLESS,here's another 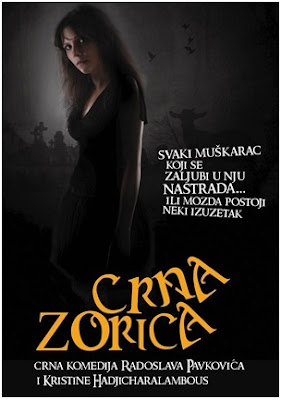 charming Serbian film for you. Currently showing in Serbian cinemas, LOVELESS ZORITSA is a delightful black comedy with fantasy elements following Zoritsa, a village girl who bears an extraordinary curse: Since her first love got mysteriously drawn in the river, men around her die in a strange way. The raged villagers name her "the kiss of death". The case is in the hands of Mane, the stubborn, young, newcomer cop from Belgrade, temporarily working in the "haunted village". Mane doesn't believe in such "mumbo-jumbo" stories. 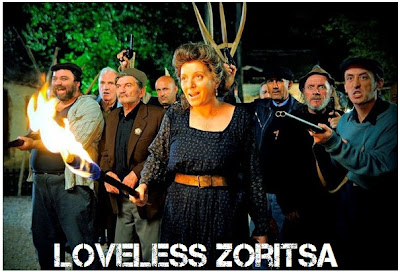 Soon he will have to face the heavily armed villagers, and he'll also have to answer the crucial question: Is Zoritsa a serial killer or just a girl who yearns for love?
Posted by DEZMOND at 12:00 AM