Well, my little freaks, it seems we are going to have a picture Friday today at HOLLYWOOD SPY, since a bunch of new movie images  have appeared around the net today. First you can check out a new banner for MARVEL'S THE AVENGERS, an upcoming summer blockbuster

which brings together some of the biggest super heroes from Chris Evans' Captain America, to Chris Hemsworth's Thor, Jeremy Renner's Hawkeye and Scarlett Johansson's Black Widow and Tom Hiddleston's Loki. The film is out this May. 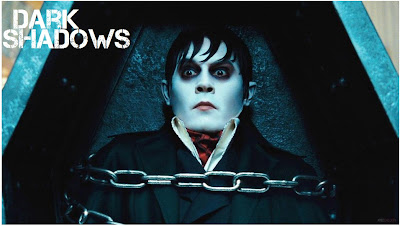 Then, there are crazy pictures (click on them to see them bigger) of Johnny Depp and the rest of the cast from Tim Burton's DARK SHADOWS which also hits cinemas this May, and I think the first 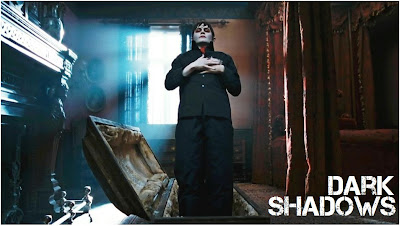 trailer (they've really waited a long time to show it) will be aired today or tomorrow. The film, following crazy adventures of the family of monsters, also stars Michelle Pfeiffer, Jonny Lee Miller and 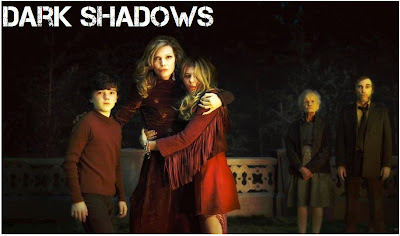 Helena Bonham Carter and is a film adaptation of the popular gothic soap opera from last century.

TOTAL RECALL
But probably the biggest treat today is the first clip, which shows 30 seconds long mishmash of some powerful scenes from the remake of sf classic TOTAL RECALL, promising some visually really nice scenes and sets. The story revolves around the company that can turn your

dreams into real memories. For a factory worker named Douglas Quaid (Colin Farrell), even though he's got a beautiful wife (Kate Beckinsale) who he loves, the mind-trip sounds like the perfect vacation from his frustrating life - real memories of life as a super-spy might be just what he needs. But when the procedure goes horribly 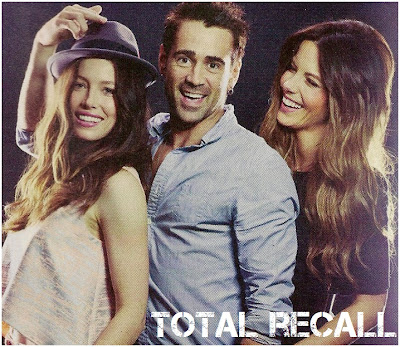 wrong, Quaid becomes a hunted man.Finding himself on the run from the police - controlled by Chancellor Cohaagen (Bryan Cranston), the leader of the free world - Quaid teams up with a rebel fighter (Jessica Biel) to find the head of the underground resistance (Bill Nighy) and stop Cohaagen. The line between fantasy and reality gets blurred and 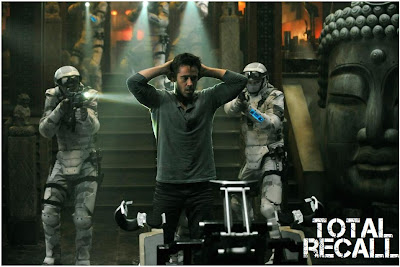 the fate of his world hangs in the balance as Quaid discovers his true identity, his true love, and his true fate. The cast also includes Ethan Hawke and always delightful John Cho.
PS the trailer starts immediately after the add :(
Posted by DEZMOND at 12:00 AM

Oh Dezmond...the embedded video is no longer available due to a copyright claim by Sony Entertainment! Way to go! Honestly though...blah. A remake of Total Recall? It really will have to be excellent for me to get buzzed about seeing it.

And the Avenger's banner is kickass. However, I saw on Comic Book Men the other night (it's the new Kevin Smith reality show that airs right after The Walking Dead on AMC) that someone was trying to sell a limited edition George Perez print featuring all of the Avengers in every costume that they have ever worn and it was signed by the master himself! George Perez!

I've just put a new one from MovieWeb :) They've been taking down clips from YouTube, hope this one will stick longer :)

I can't wait for the Avengers movie!!!!!

And for Total Recal (whos video I can't see) it looks the same as the other one... I just hope it has a three breasted lady like the original.

Ah Johnny... I love you even when you look strange ;)

I'm still struggling over the idea they've done a remake of Total Recall. Maybe the acting will be better.... ;)

the video starts right after the add, just be patient, Berserc :)

well, Colin's acting is equally bad as Arnold's :) so no hope there, but at least he looks better :)

Okay I sat through like a minute of some nozzle dripping and then it went to talking about some flowbench or something. I have no idea what that is. But your skillz at putting up a Total Recall trailer are FAIL.

But I still luv you Dezzie. Perhaps today is just not your day.

Mikey, read the instructions for watching the clip bellow the trailer :) It says loud and clear - THE TRAILER STARTS AFTER THE ADD :) Just be patient, it's not like Chris Evans is waiting at the door to give you a smooch or something...

But I saw it just a few minutes ago. So I'm all good.

I think zombies have taken over your computer, Mikey :P

and Helena is there too :)

Dark Shadows and Avengers - Yes!
Not 100% keen on Total Recall. Am I right in thinking that they ditched the whole Mars concept?

Hahaha...love the crazy pics of Johnny Depp. And how sad is it that I can remember the original Dark Shadows t.v. show. :(

I kinda like the clip, although I'm not at all a fan of Farrell and Biel.

I think the trailer should come tonight or tomorrow, but I'm not sure. It's weird that they haven't released any trailers and it's just two month before the release

Can't wait for The Avengers, that is going to be soo good, hopefully. As far as total recall goes, it looks like the exact same thing, except I want to smack Colin Farrel upside the head. Still remember The New World, AWFUL cringe every time, hate him.

So looking forward to the avengers but i'm not sure about total recall...I mean the original was so awesome!

yep never ever those were such awful trash.

where can i watch that MARVEL'S THE AVENGERS for free lol

The Avengers is the one I want the most, have done since I first heard about it. Samuel Jackson and Downey Jr., I love watching both of them work. Now I know you don't like Farrel darling, but he is Irish and I do lust after him. He's just such a bad boy, I can't help myself. I know you put in a new trailer, but when I got here, it wasn't loading for me.

looks like the video has a never ending ad -__-

I am pretty pumped for total recall actually. I think it looks like it might well be OK!!

How dare they touch Total Recall, Dezz? Fire them all! What's next? Robocop? T1? I need a hanky.... :( Thanks for making me blue.

Good news on Total Recall but the vid didn't like me at all...

Colin may not be that great, but he's certainly a step up from Arnold. ;) I'm liking this version of Total Recall.

Johnny looks awesomely weird as Barnabas and I so cannot wait to see Dark Shadows.

The Avengers is going to be awesome. My nephew and I are already planning to be first in line around here. :))

and we hate that they ruined the chances for new epics :(

It's the opposite with me :)

try to seduce the local lady from the box office ;)

I do find him terribly hot, but I hate his acting, he ruined all teh films he was in.
Try again, darling, the video works just fine, sometimes it pops up an add before the trailer, but the clip is there.

I wrote that under the trailer :) Just be patient and wait for the add to finish. I can't find a trailer from YouTube since the studio is taking it down.

glad you agree, Scottie, it means a lot!

oh, Randy, you sad millioner, I already wrote last week that ROBOCOP Is in the making and that Joel Kinnaman is in the lead role :)

try again, it's there, I tried it dozens of times and it works :)

agreed on that one, Melsy.
When it comes to AVENGERS, you know that I'm not watching that one, nor the HUNGER GAMES. Even if I was paid I wouldn't watch them :) but I know those two will be the biggest blockbusters this year for sure. Just please don't take the kid to HUNGER GAMES, please :(

Yeah and the only thing epic about them were how much manure they buried themselves under. How anybody can think such movies are good is beyond me.

What!?! A Tim Burton Movie starring Depp and HBC, how original. It could only be more so if it involved a gothic type theme and had the forementioned actors wear a lot of black and paint their faces white.

I am so tired of this!

Total recall won't be worth remaking unless they include the line "consider this a divorce," and they have a martian girl with three breasts.

The Dark Shadows pics look pretty weird. Remaking Total Recall seems rather absurd. I loved the original version and wasn't particularly drawn in by the trailer. If they want to remake things they should do some of the great sci-fi from the 50s.

Lee
An A to Z Co-Host
Tossing It Out
Twitter: @AprilA2Z
#atozchallenge
Please vote for your favorite A to Z Video

LOL, some people don't have a wide range of imagination I guess :)
CONSIDER THIS A DIVORCE was such a classic line :)

ooh, that would be great, since sf from the 50's was mostly space operas, yes?

I loved the original Total Recall so I probably won't like the new one. My husband will though because he loves anything that has Kate Beckinsale in it. My favorite line from it "Two Weeks, Two Weeks" - it always cracks me up.

Kate Beckinsale seems to be a fave with millions of husbands :)

Actually I was thinking about the nuclear mutant and monster movies and the aliens invading earth. I love science fiction that takes place right here on Earth.

Wow, those look like amazing films. I'm super excited about Avengers though.

you actually have some of such films this summer, BATTLESHIP for example, it's about aliens attacking Earth :)

Kate and Jessica- Colin is a happy bastard!;)