As "MovieWeb" reports, gorgeous Mila Kunis will lend her voice in HELL & BACK, a stop motion animated film which follows two best friends as they

rescue their buddy who has been accidentally dragged to Hell. Mila plays Deema, a female demon whose ability to navigate the underworld makes her the toughest rogue demon in Hell. Her independent streak may come from her greatest secret: She's half-human. She was sired by the Orpheus of myth when he travelled down the River Styx years ago. What the myths don't say is that he was nailing everything that moved. When Orpheus is revealed to be... well, a bit of a tool, frankly... Deema has to look inside to figure out what it means to be human. As you probably remember, we will be watching Mila next year as witch Theodora in OZ: THE GREAT AND POWERFUL next to Michelle Williams and Rachel Weisz as Glinda and Evanora and James Franco as Oz.

According to "Deadline" Bruce Willis, who has been very busy lately as you can check out in HOLLYWOOD SPY's spotlight on 2012 busiest stars, has a new gig: he will play a hired bodyguard in FIVE AGAINST A BULLET an action film which follows a Mexican politician who, after the death of his father at the hands of a drug cartel, hires the five best bodyguards from around the world to protect him through a contentious election. One of the films I've announced before ALFRED HITCHCOCK AND THE MAKING OF PSYCHO, in which Anthony Hopkins plays Alfred Hitchcock and Helen Mirren is portraying his wife, in the story circling around the making of his famous horror, has now got Scarlett Johannson as Janet Leigh and super handsome British star James D'Arcy (MASTER AND COMMANDER, CLOUD ATLAS)as Anthony Perkins.
Are you ready for hilarious, heartwarming and profoundly charming THE BEST EXOTIC MARIGOLD HOTEL? It hits USA cinemas this May, and it already had its premier in UK, with the most amazing cast which 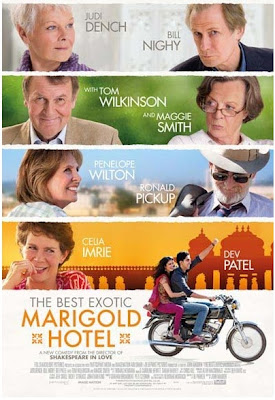 includes Judi Dench, Maggie Smith, Tom Wilkinson, Bill Nighy and Dev Patel. This delightful film follows a group of British retirees who decide to "outsource" their retirement to less expensive and seemingly exotic India. Enticed by advertisements for the newly restored Marigold Hotel and bolstered with visions of a life of leisure, they arrive to find the palace a shell of its former self. Though the new environment is less luxurious than imagined, they are forever transformed by their shared experiences, discovering that life and love can begin again when you let go of the past.
Posted by DEZMOND at 12:00 AM