For today's mishmash of fresh movie news in a boring postholiday week I first have some pics for you: directly from the set of David Cronenberg's "A Dangerous Method" you can see first images of Viggo Mortensen as Sigmund Freud and Michael Fassbender as his student Carl Jung. The movie will tell the story of the intense relationship between the two famous psychologists and how their conflict birthed psychoanalysis. The film is out next year and also stars Vincent Cassel. 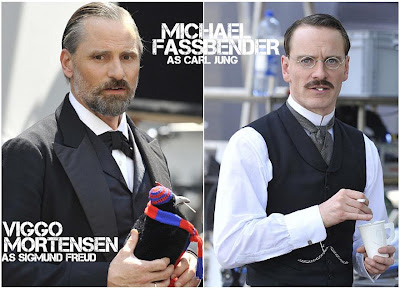 Daily update on "X-Men: First Class" casting process: surfer Erica Hosseini has revealed that she has auditioned for the role of Willow, 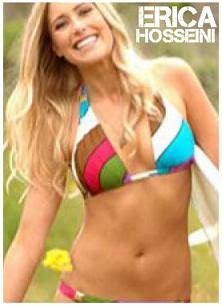 a character similar to Mystique which could mean lots of body paint on a naked body :) Willow has a shape shifting ability but when she mimics others she always has some marks on her face which are revealing her true identity.

Celebrating their Independence Day this weekend, American Internet users were also voting for the actor whom they would like to see in the role of Uncle Sam over at WENN.com. Believe it or not, it seems Americans have a great sense for irony so they've chosen Jim Carrey for the 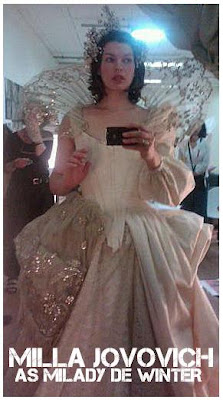 winner with 46% even though he is actually a Canadian. 26 % of votes have secured a second place for Robert De Niro, while crazy Chris Rock took third spot with 25%. People really have a good sense of humor :)

Milla Jovovich has posted some pics over at Twitter from her first dress rehearsal for the historical adventure "The Three Musketeers" directed by her husband Paul W.S. Anderson. She will wear luxurious 17th century gowns playing the naughty Milady de Winter. As one of the villains, Milla says Milady will do crazy fight sequences in the big, long dresses which are mostly white. Coming out next April, the film will also star Logan Lerman, Christoph Waltz, Orlando Bloom, Ray Stevenson, Luke Evans, Matthew Macfadyen, Mads Mikkelsen...
Posted by DEZMOND at 3:42 PM