HILARIOUS FIRST TRAILER FOR "VAMPIRES SUCK" AND A HILARIOUS PIC OF COLIN FARRELL FROM "HORRIBLE BOSSES" :)

You know I'm not into non-intelligent comedies, but this one brought to us by the guys who couldn't sit through another vampire movie, just hits the target I like :) Coming to theaters this August, "Vampires Suck" is a goofy parody on "Twilight" and "Alice in wonderland". Check out the first trailer for the film in which the makers of "Date Movie", "Epic Movie" and "Meet the Spartans" take on the vampire genre, particularly "The Twilight Saga". 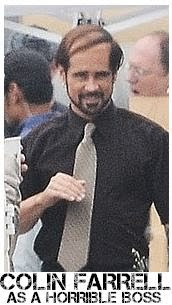 the set of the new comedy "Horrible Bosses" in which he is sporting a hilarious comb-over and you can't really recognise him :) Starring Jason Bateman, Kevin Spacey, Jamie Foxx, Colin Farrell and Jennifer Aniston, "Horrible Bosses" brings the story line which revolves around three friends who decide to whack their abusive "superiors" in a desperate bid for happiness but their plan goes terribly wrong. Spacey, Farrell and Aniston will play oppressive bosses, and Bateman will be one of the co-workers. The movie is scheduled for premiere next summer, July 2011.
Posted by DEZMOND at 3:34 PM