You know when the ComicCon starts we get a lot of movie treats: "Yahoo Movies" has released today two amazing promo posters which will be used during ComicCon for two of the Marvel's most anticipated films "Thor" and "Captain America: The First Avenger".

Marvel is organizing a big panel at San Diego ComicCon this Saturday, and hopefully they might release some pictures and images for both "Thor" and "Captain America: The First Avenger" on that occasion, beside these art work posters.

And when we are mentioning "Thor", Mark Protosevich, the screenwriter who adapted Thor for the big screen, is planning to adapt another comic book: it is possible that he will also direct 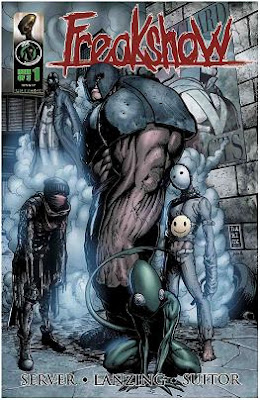 "Freakshow", the film version of the upcoming comic book in which the story revolves around five young people who are turned into mutants with special powers after a chemical explosion and they must decide whether to use their powers to save the city or to exact revenge on those responsible for the explosion.

Another comic book to be adapted into a film is "The Strange Case of Hyde". This Dark Horse comic follows Dr. Jekyll and his alter-ego Mr. Hyde, bringing a fresh view of the famous story by making the split personality the center of a Victorian-era action-adventure that sees him go head-to-head against a historical villain.
Posted by DEZMOND at 3:17 PM