If you expected that Kenneth Branagh's "Thor" will have a stunning visual design as some of his previous movies ("Hamlet"), you were right: judging from the new image from "Thor" the sets will be larger than life. The latest pic published by "LA Times" shows Thor (Chris Hemsworth) kneeling in front of Odin (Anthony 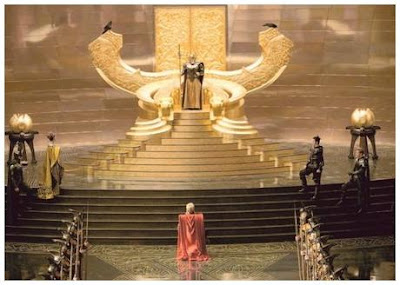 While Andy Whitfield recovers from cancer, Starz is preparing "Spartacus" prequel which will be called "Spartacus: Gods of the Arena" and it seems they already have some new cast members: Dustin Clare will play Gannicus, the champion gladiator in the House of Batiatus before Spartacus.Jaime

Murray ("Dexter") will take the role of a Capua social climber while Marisa Ramirez ("General Hospital") will be a slave girl. Andy Whitfield will have just a brief appearance in the six-part prequel. The second season of "Blood and Sand" will start shooting after "Gods of the Arena" and will be aired sometime later in 2011. 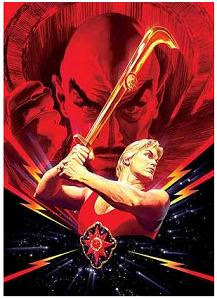 And Breck Eisner has talked to "MovieWeb" about his adaptation of "Flash Gordon" saying that the 80's sf classic was campy with bad special effects and that his version will not be a remake since it will go back to strips from the '30s bringing an updated version in the form of an action and adventure sci-fi film. Eisner also said that it will be an origins story for Flash who will go to Mongo to save the planet kinda like a superhero. New "Flash Gordon" could be turned into a franchise if the film proves successful.
Posted by DEZMOND at 3:23 PM