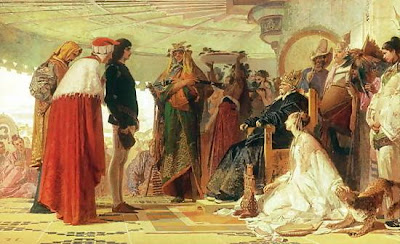 It seems that after the success of his Chinese epic "Red Cliff" (which is about to be released in the USA), director John Woo has found himself a new epic project. In an interview for "Movieline" he has revealed his plans to do new, epic adaptation of "Marco Polo" story. He said that he was particularly interested in famous explorer's relationship with Kublai Khan whose emissary he was throughout Asia. Since Woo moved back to China few years ago, it's not quite clear whose project will this be (apparently it will be in English language), but another epic is always welcomed, if you ask me.
Posted by DEZMOND at 9:33 PM