CHARLIZE, KATE AND MARIAH WIN OUR "BEST WHEN NOT LOOKING THEIR BEST" POLL TOGETHER 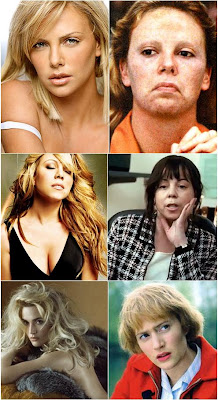 The surprise outcome of our first BEST WHEN NOT LOOKING THEIR BEST poll, honoring actresses who are brave enough to reduce their natural gorgeousness in order to create amazing roles, brings us three winners :) Charlize Theron, Kate Winslet and Mariah Carey all had 23% of votes.
Charlize Theron, one of the sexiest actresses in Hollywood, decided to shock everyone by portraying a masculine prostitute who becomes a serial killer in "Monster". It payed off, since she won an Oscar for the role.
Kate Winslet has always been a woman comfortable with her body and her looks. She even became a role model for all the women who refuse to look anorexic just for the sake of being trendy and stylish. In "Iris" she portrays physically unattractive novelist Iris Murdoch and creates a breathtaking role which brought her an Oscar nomination.
Mariah Carey has shocked everybody this year when after a series of horrible roles in insignificant movies, she decided to show her true talent by portraying an ordinary social worker in "Precious". The fact that she managed to strip off her divalicious attitude and star looks, might even bring her an Oscar nomination next year, since most critics agree that her role represents a true gem in this year's cinematic offer.
The second round of our BEST WHEN NOT LOOKING THEIR BEST poll starts today, with even stronger competition between five stunning actresses who proved that they can be most beautiful even when looking their worst.
Posted by DEZMOND at 9:36 PM