FIRST POSTER FOR "HOW TO TRAIN YOUR DRAGON" 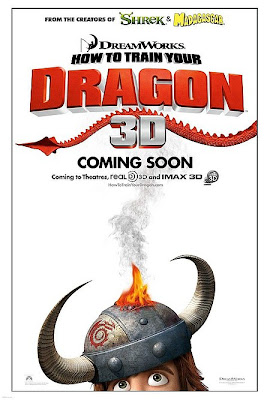 The first poster for "How to Train Your Dragon", possibly one of the most adorable upcoming animated movies, is just out. Coming in spring 2010 with voices of Gerard Butler and America Ferrera it tells the story of Hiccup Horrendous Haddock III, heir of the Viking chiefdom, but a boy with one very big problem: a hero he is not. "How to Train Your Dragon' is the riotous story of Hiccup's quest to hunt down the fiercest dragon, bring it into submission, and-hopefully-pass his initiation. Instead, he ends up with the smallest, most ornery dragon-it's even toothless! Thus begins the hijinx of the world's most lovable, unlikely hero and a most reluctant "beast." Packed with energetic drawings and plenty of action, this boisterous tale is just right for fantasy fans or anyone with a spirit of adventure. The movie is based on the book by Cressida Cowell.
Posted by DEZMOND at 10:00 PM