NEIL MARSHALL OR NEILL BLOMKAMP REPLACING PETER BERG AT THE HELM OF "DUNE"??? 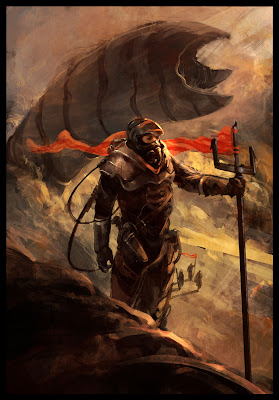 Bad, bad news people, real bad! It seems that an anticipated remake of Frank Herbert's fantasy saga "Dune" has undergone some helm changes again.Apparently director Peter Berg will not direct the remake.
Although the remake is still in the works, Josh Zetumer is writing the film now, and Paramount is searching for a new director. There are rumors that directors Neil Marshall and Neill Blomkamp are in consideration to take over. There were also some truly scary reports that Robert Pattinson was in talks to star in the film, but that was connected with Berg directing the movie, so it's unclear if he still might join the project or not.
I hate this news. Although I'm not a fan of Peter Berg I liked his idea of making a more adventurous and action packed "Dune" instead of the original mystic philosophical sf drama. I'm not sure if these new contenders for the directorial seat share his vision. And I can't even explain how scary it is imagining Pattinson in the lead role.
Posted by DEZMOND at 9:23 PM