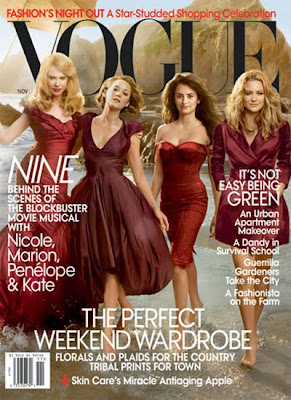 November issue of "Vogue" has the girls from the upcoming musicle "Nine" on its cover. Nicole Kidman, Kate Hudson, Marion Cotillard and Penelope Cruz are gracing the cover of the popular magazine. Together with movie legends Judi Dench and Sophia Loren, pop star Fergie and Daniel Day Lewis they star in the longly awaited musical directed by Rob Marshall. With so many leading ladies, this movie needed a lot of stunning costumes, so Oscar award winning designer Colleen Atwood ("Memoirs of a Geisha", "Gattaca", "Chicago", "Planet of the Apes") had created couture-like fashions that date back to the ’20s. The ladies will sing and dance in 350 costumes and 200 pairs of shoes using a lot of frills, satin, lace, sexy pants and floating dresses combined with unavoidable ostrich feather fans.
The movie tells the story of Guido Contini (Daniel Day-Lewis), a world famous famous film director as he confronts an epic mid-life crisis with both creative and personal problems. He must balance the many women of his life, including his wife (Marion Cotillard), his mistress (Penelope Cruz), his film star muse (Nicole Kidman), his confidant and costume designer (Judi Dench), an American fashion journalist (Kate Hudson), the whore from his youth (Fergie) and his mother (Sophia Loren).